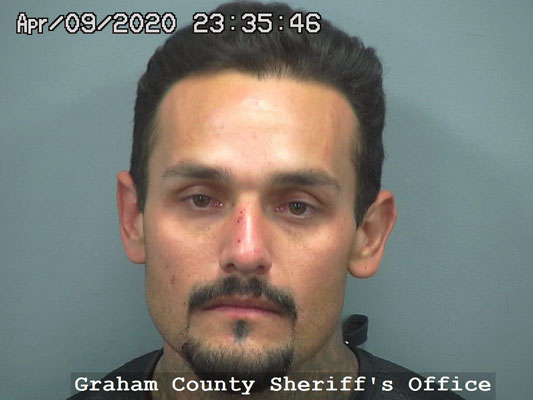 Contributed Photo/Courtesy GCSO: Richie Pablo Garcia was apprehended after fleeing from the scene of a vehicular crash.

SAFFORD – Richard “Richie” Pablo Garcia, 30, was arrested and booked into the Graham County Adult Detention Facility after allegedly colliding with a parked car and fleeing from the scene on foot.

According to a release from the Safford Police Department, Garcia collided a 2004 Mitsubishi SUV he was driving with a parked 2006 Cadillac on Thursday just after 7 p.m. The force of the collision caused the Cadillac to strike a parked 2002 Dodge pickup truck as well. The collision reportedly occurred in the area of 2nd Avenue and 16th Street. After the crash, Garcia then ran from the scene.

Witnesses positively identified Garcia by photos and the vehicle was found to be registered to his wife. Officers learned Garcia was wanted on a $25,000 felony warrant for aggravated assault and disorderly conduct.

While searching the area, several people informed the officers that they had seen Garcia running through yards and alleys and knocking on several doors. After being directed to the area of Fargo and Stirrup Drive, Garcia was located and taken into custody. After being cleared from the hospital, Garcia was booked into the jail on his warrant. The case is also being investigated for possible DUI charges.

Garcia was previously tracked down in May 2019, after being wanted on two separate incidents of assault.

Garcia was then booked into the Graham County Adult Detention Facility on two counts of aggravated assault and a charge of disorderly conduct with a dangerous instrument for allegedly striking one of the victim’s with a flashlight.

According to previous police reports, Garcia was accused of beating his own father – breaking his jaw and finger – after his father advised him that he was driving a work truck recklessly around the neighborhood. The victim was later flown to a Tucson hospital for treatment.

The same truck was then seen at an incident at the Court Street Apartments the same evening in which Garcia allegedly drove into the area at a high rate of speed endangering nearby children. When a man took umbrage at the reckless driving, Garcia allegedly initiated a physical confrontation and choked and kicked the man before hitting him in his head with a  flashlight. That victim suffered a broken cheekbone and broken rib and was treated at Mt. Graham Regional Medical Center.

Ten years ago, Garcia escaped from the old Graham County Jail and ended up receiving an extra three years to his sentence for one day of freedom. He pleaded guilty to theft of means of transportation, aggravated DUI, unlawful flight from pursuing law enforcement, two charges of escape in the second degree, and hindering prosecution in the first degree and was given a sentence of 4.5 years in prison followed up by four years on probation. He was released from probation in January 2019.