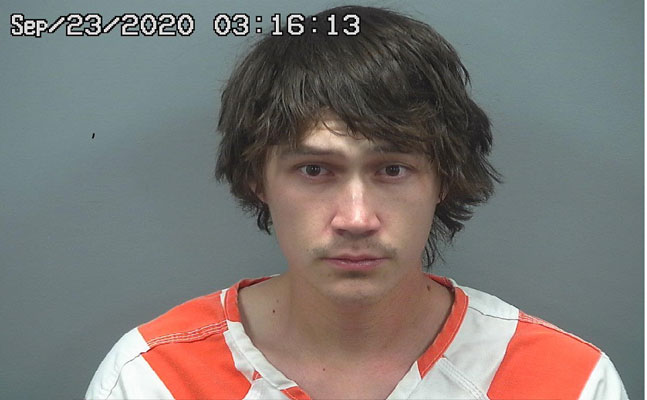 Contributed Photo/Courtesy GCSO: Canyon Rogers was jailed for felony flight from pursuing police and criminal damage. He was later charged with leaving the scene of an accident and DUI charges are pending.

SAFFORD – A man who allegedly fled the scene of an accident while intoxicated and then ran from pursuing law enforcement was caught and booked into the jail on Tuesday, Sept. 22.

Canyon Wayne Rogers, 22, was arrested and booked into the Graham County Adult Detention Facility on charges of unlawful flight from pursuing law enforcement and criminal damage. He was also later charged on Sept. 28 for failure to stop at the scene of an accident that includes damage to another vehicle. An additional charge of DUI is pending blood test analysis and review by prosecutors.

According to a Safford Police report, an officer was on patrol at about 9:15 p.m. when he noticed a dark-colored Chevy Cruz eastbound on U.S. Highway 70 traveling faster than 60 mph in a 35-mph-zone.

The officer initiated a traffic stop and after initially appearing to yield, the Chevy – driven by Rogers – accelerated to “a high rate of speed” eastbound.

Rogers turned left onto Hollywood Road and collided with the entrance sign and brick wall to the Sunrise Village Mobile Home & RV Park.

Rogers eventually pulled into a space in the trailer park and was apprehended at gunpoint by the officer.

Rogers appeared intoxicated and allegedly advised he had been drinking with some friends when he decided to go home. Along the way, he said he came upon a slow-moving vehicle and became frustrated and sped around the driver and that’s when the officer clocked him. He added that he didn’t stop for the officer because he was recently arrested for DUI in Thatcher, according to the police report.

Additional officers and a second party arrived at the scene, and the second party advised that Rogers’ vehicle had struck his vehicle near Main Street and U.S. Highway 70 and that he sped away from the scene. The Chevy Cruz had body damage to its right side, a flat front tire, and was missing its front bumper.

After failing a field sobriety test, a blood sample was taken from Rogers’ for testing purposes. A charge of aggravated DUI is pending the test results and review by prosecutors.

Rogers was then booked into the jail on his charges of unlawful flight and criminal damage.