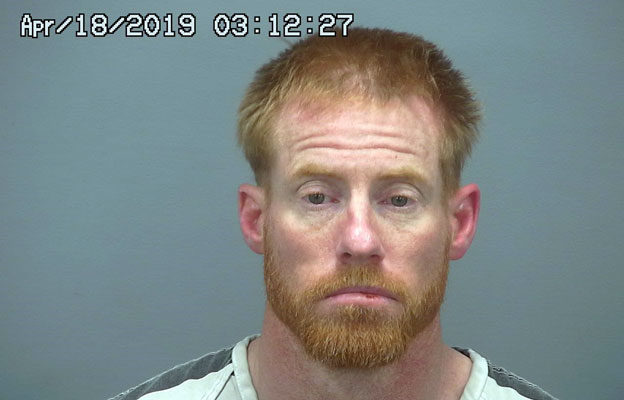 Contributed Photo/Courtesy GCSO: Stuart York was booked into jail on a warrant with an underlying charge of felony flight after once-again failing to pull over for a police officer.

SAFFORD – A man wanted on a probation violation with an initial guilty charge of felony flight fled from officers early Thursday morning.

According to a  Safford Police report, an officer saw York’s blue Saturn at a gas pump at the new Circle K at 1542 E. U.S. Highway 70 at about 1:15 a.m. and believed the driver to be familiar. After learning his name through the vehicle’s registration, the officer checked for warrants and was alerted that York was wanted on a probation violation stemming from an original charge of felony flight.

The officer then attempted to pull over York and illuminated his emergency lights, but York failed to yield and continued eastbound on U.S. Highway 70. York then turned southbound onto Bowie Avenue in Solomon and then eastbound on Clifton Street before coming to a stop.

The officer then placed York on the ground at gunpoint as York exited the car and asked if he had any weapons. The officer reported he believed York would attempt to run from him but York did not resist.

York then told the officer that he had a pocketknife on him and when his arm went down toward his waist area, the officer delivered “several strikes” to York’s shoulder while giving him verbal commands. The officer later noted that it appeared that York never attempted to obtain the knife and that there were communication difficulties because the officer had accidentally left his siren on and the two could not hear each other.

When apprehended, York apologized for not stopping and said he just wanted to drive his car to the house he parked in front of so it wouldn’t be towed and impounded. He said he was homeless and his car was all he had and he knew he had a warrant for his arrest.

The occupants of the residence the car was parked in front of agreed to take the property inside the car, but the officer still had the vehicle itself towed from the scene and impounded.

York was then booked into the Graham County Adult Detention Facility on his warrant.