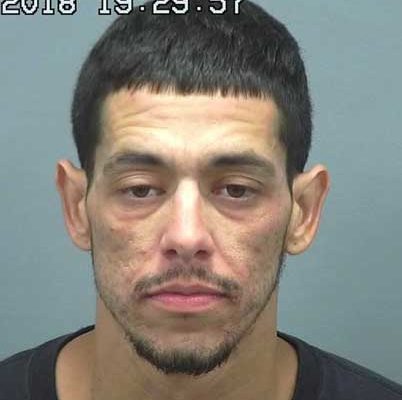 Contributed Photo/Courtesy GCSO: Albert Rodriguez was booked into the jail for theft of means of transportation after allegedly stealing a Nissan Sentra during a four-day drug binge.

SAFFORD – Considering the state of the man who allegedly stole the victim’s car, it appears they are lucky to get it back without major damage.

Albert Jorge Rodriguez, 32, of Safford, was arrested and booked into the Graham County Adult Detention Facility on Thursday, June 14, for theft of means of transportation.

Rodriguez was identified by a witness who said the suspect left a vehicle in the 500 block of 2nd Avenue, jumped a fence and ran southbound.

Authorities had previously been dispatched to a residence on 1st Avenue at about 2:30 p.m. regarding a stolen 2007 Nissan Sentra.

While filling out a stolen vehicle affidavit, the officer was notified that the missing car was in the roadway near his patrol vehicle. The officer then saw the Sentra head northbound on 1st Avenue and turn westbound onto Main Street.

The officer attempted to locate the Sentra but was unable to find it. During his attempt, he noticed Rodriguez walking along the sidewalk on the south side of the Coca-Cola building east of Thriftee Food & Drug.

Shortly afterward, officers received the dispatch about the unusual activity on 2nd Avenue. Upon responding to that scene, the Sentra was located along with a Nissan key fob and a key fob for a Dodge vehicle.

After speaking to the witness, Rodriguez was located in the 1000 block of Central Avenue and was detained. The witness later positively identified Rodriguez as the man who was seen exiting the driver’s side of the vehicle and fleeing the area.

The victim was shown the key fobs and said they were both his and were likely in the vehicle’s glove compartment.

According to a Safford Police report, Rodriguez later advised he had been up on drugs for four days and had used methamphetamine that morning and heroin roughly two hours before being arrested by the police. Rodriguez denied taking the car but admitted that he did not remember a portion of his day.

He was then transported to the jail and booked on a charge of theft of means of transportation. The Sentra was released to the victim.