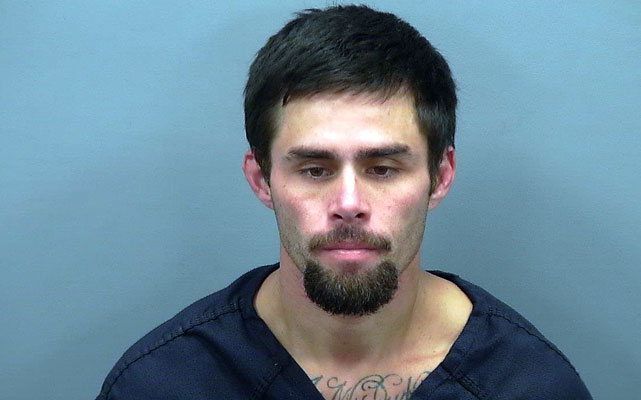 Contributed Photo/Courtesy GCSO: Olivaz Cruz was mistakenly identified as a Thatcher domestic violence suspect when he ran from police. However, he ended up having a felony warrant of his own for a parole violation and was booked into the jail.

SAFFORD – Sometimes it seems as if it is like shooting fish in a barrel.

A man mistaken for a Thatcher domestic violence suspect ran from police on Friday, Dec. 6, and while he was not the suspect they were looking for he was found to have a felony warrant of his own.

When the Safford officer turned around to ask the bicyclist’s name, the man fled and crossed U.S. Highway 70, forcing a motorist to slam on their brakes to avoid a collision.

Both officers activated their emergency lights and pursued the suspect southbound on 11th Avenue and then eastbound. The suspect soon hit a fence, ditched his bike and continued to flee on foot through a residential property. The Safford officer cut him off around the other side of the house, however, and the suspect was taken into custody without further incident.

Upon contact, the man advised his name was Olivaz Cruz, and that was not the person the Thatcher officer was looking for. However, a warrant check confirmed Cruz had a felony warrant from the Arizona Department of Corrections for a parole violation and he was arrested and booked into the Graham County Adult Detention Facility on the warrant. His bicycle and other property were given to his sister.

Cruz advised that he ran from the police because he was aware of the warrant for his arrest.