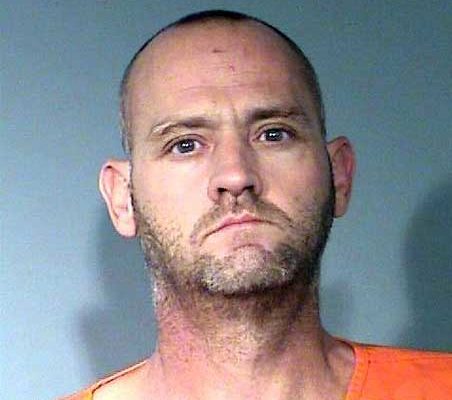 Contributed Photo/Courtesy GCSO: Police officers were on the lookout for Christopher Randy Webb after he allegedly attacked his sister with a kitchen knife. This picture is from a previous booking photo.

SAFFORD – A man who reportedly has belligerent behavior while drunk allegedly cut his sister with a kitchen knife during an argument early Saturday morning.

Police officers searched for Christopher Randy Webb, 43, in the early morning hours of Saturday, July 28, after the incident was reported, but were unable to find him.

An officer was initially dispatched at about 1:48 a.m. to a residence on 11th Avenue regarding an assault involving a knife.

According to witness statements, Webb had been drinking alcohol and was sitting at the kitchen table with his sister and his sister’s friend playing with playdough. Webb and his sister reportedly got into a verbal argument and Webb became enraged with the victim, according to the police report.

Webb allegedly then picked up a kitchen knife and threw it at the victim, causing a laceration to her abdomen roughly one inch in diameter but only skin deep.

After cutting his sister, Webb picked up the knife, washed it off in the sink and told her “you’re dead”. He then left the residence southbound through the alley, according to witness statements.

Paramedics from Lifeline Ambulance evaluated the victim at the scene and she later chose to travel in a personal vehicle to the Mt. Graham Regional Medical Center, where she was treated and released.

Officers attempted to locate Webb, but the rainy weather conditions at the time hampered the search. An “attempt to locate” was then broadcast over the police’s radio.

The knife was taken as evidence, and the officer forwarded his report for charges of aggravated assault/domestic violence and threatening or intimidating.