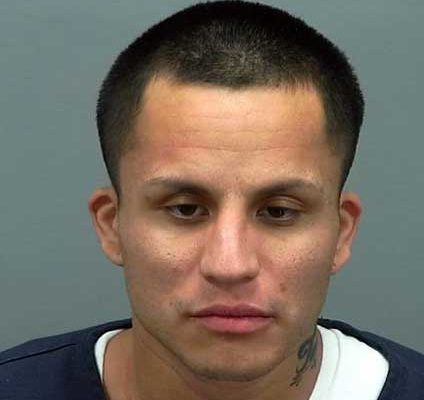 Contributed Photo/Courtesy GCSO: Robert Grado, 24, led officers on a police pursuit through Safford in an attempt to not go back to prison.

SAFFORD – Robert Grado, 24, was taken into custody and booked into the Graham County Adult Detention Facility on Monday, April 9, after leading officers on a police pursuit through town.

Grado was booked on a warrant with additional charges of unlawful flight from pursuing law enforcement, reckless driving and driving on a suspended license pending.

Grado has a long history with law enforcement, going back to his teenage days when he was caught stealing beer multiple times and was a suspect in numerous burglaries. He also previously got into trouble for biting a Walmart employee who attempted to thwart his shoplifting attempt.

Most recently, Grado was released from prison Feb. 26 after serving time for yet another shoplifting charge.

According to a Safford Police report, an officer was on patrol on Main Street when he saw a silver, four-door sedan fail to stop adequately at a stop sign at the intersection.

The officer attempted to make a traffic stop, but the vehicle, later found to be driven by Grado, failed to yield. The officer then initiated his emergency lights and siren and pursued the sedan as it went west onto U.S. Highway 70, then onto Kay Lane, Gila Avenue, and finally west on 4th Street. According to the officer’s report, the vehicle’s tires were smoking and the driver was losing control while turning at the corners.

As the sedan traveled on 4th Street, the officer turned off his siren and lights and slowed down for the public’s safety while still keeping the sedan in sight distance.

The officer soon later came upon the sedan parked in the 300 block of 4th Street, and a witness advised that the driver (Grado) had fled eastbound on foot.

As the officer notified assisting officers of the situation, a Safford Police sergeant alerted that he had caught Grado. When questioned why he fled the police, Grado said he knew he had a warrant for a parole violation and he didn’t want to go back to prison. He allegedly said he thought there was a chance he could get away and knew he would go back to prison if he was caught.