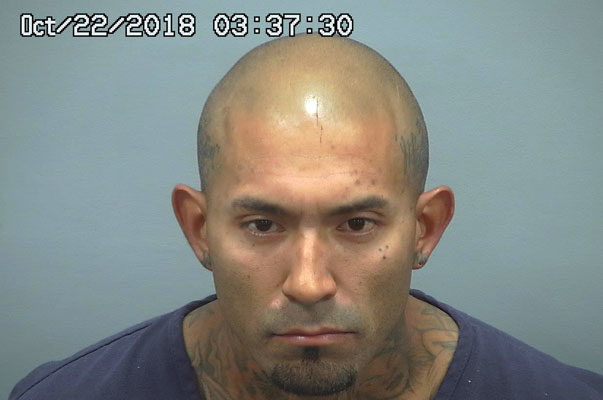 Contributed Photo/Courtesy GCSO: Anthony Alvarez, 32, was booked into the Graham County Adult Detention Facility on multiple charges after allegedly crashing into a utility pole while drunk and high.

SAFFORD – A man who failed to control his Jeep and crashed into a utility pole Sunday night was arrested and booked into the Graham County Adult Detention Center on multiple charges.

Anthony J. Alvarez, 32, was arrested and booked on charges of aggravated DUI, possession of a dangerous drug, possession of marijuana, possession of drug paraphernalia, criminal damage, and driving on a suspended license.

Officers were dispatched at about 11:10 p.m. to the area of 8th Avenue and U.S. Highway 70 regarding a blue Jeep that had crashed into a utility pole.

Upon arrival, officers located the Jeep with heavy front-end damage and saw a utility pole knocked to the ground. Officers also noticed Alvarez seemingly attempting to crush something with his foot and then kick away debris around the wreck. A witness later informed officers that they saw Alvarez attempt to get rid of a plastic baggie, and that was what he was stomping on. The witness also said a male passenger had fled from the scene and was picked up by someone in a van.

A plastic baggie containing methamphetamine was located where Alvarez was stomping, and a broken glass pipe with meth residue and a baggie of marijuana were located nearby.

After initially claiming the marijuana belonged to the passenger who fled, Alvarez allegedly admitted all the drugs and paraphernalia were his. The officer also located several cues that indicated Alvarez was likely under the influence of meth and marijuana, and Alvarez also had an odor of alcohol on his breath, according to the Safford Police report. Additionally, Alvarez would only refer to the missing passenger as “Cowboy” and that he was a Caucasian male.

After failing field sobriety tests, Alvarez was taken back to the Safford Police Department, where his blood was taken for testing purposes. He was then transported to the jail and booked on the above-listed charges.