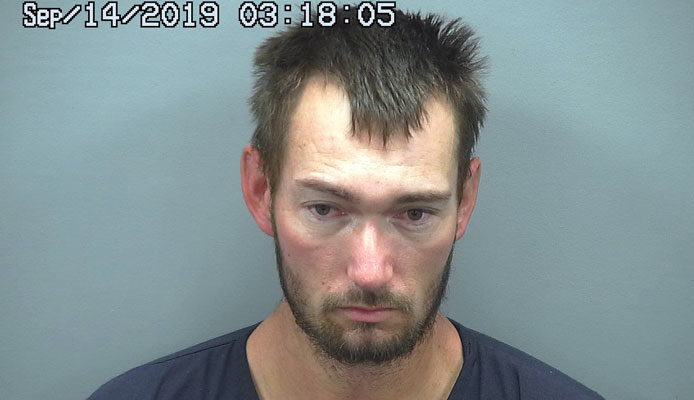 SAFFORD – Officers from the Safford and Thatcher police departments teamed up last Friday, Sept. 13, to apprehend a man suspected of attempting to break into vehicles and shoplifting power tools from Ace Hardware.

Johnny Dillon Sanders, 29, was arrested and booked into the Graham County Adult Detention Facility on two counts of criminal damage. Sanders has denied any wrongdoing.

The case stems from damage to two separate vehicles’ windows that were parked at the Safford High School and the Safeway parking lot.

A Safford officer was initially dispatched at about 1:25 p.m. to Safford High School regarding a vandalized vehicle. Upon arrival, the victim showed the officer the damage made to her vehicle. She also advised the windows were made of shatter-proof glass.

During his investigation, the officer reviewed surveillance footage of the school’s parking lot and noticed a black Honda sedan drive through the high school lot and parking lot for Ruth Powell Elementary School across the street. The officer also saw a man exit the Honda in both lots and walk toward other vehicles. The officer noted it appeared that the man was looking inside the vehicles.

The man was captured on video at the high school lot approaching the victim’s vehicle and crouch down next to it. The video shows him then leaving and shortly afterward the victim approached her vehicle and noticed the damage.

The officer was able to check the Honda’s license plate and it came back as registered to a woman who has a child enrolled in the elementary school. An online records check by the Gila Herald revealed that the woman had recently been granted a marriage license to Johnny Sanders.

The victim took her vehicle to EA Glass to get a quote regarding fixing the damage to her window and when she arrived she was informed that her vehicle had the same type of damage to another vehicle that had come in earlier that same day. The glass repair facility said the earlier vehicle had been damaged at the Safeway parking lot.

The victim informed the Safford officer, who checked the police involvements and saw that Thatcher had taken a report from a victim at Safeway earlier in the day.

The Safford officer met with the Thatcher officer at Safeway and they reviewed video surveillance that showed the same black, Honda and a the same male subject, later identified as Sanders, exit the vehicle and walk around the parking lot.

In the video, Sanders is seen apparently looking into vehicles and walked by the victim’s vehicle several times. Officers believed Sanders was using some object to punch the window each time he walked by but he was unsuccessful in breaking into the vehicle.

The officers then used the address obtained by the Honda’s license plate and when they arrived at the home they located the black Honda and Sanders.

Sanders admitted to being in the area of both crimes but gave various explanations and denied any wrongdoing.

During questioning, the Safford officer also located a personal check from another individual made out to a credit union for $233.15. Sanders said the check had ended up in his mail and that he intended to return it to the sender but instead of simply noting that on the envelope and putting it back in the mailbox said he opened the mail and intended on returning the check in person himself.

Prior to being booked into the jail, Sanders was also interrogated by another Safford officer regarding the theft of power tools from Ace Hardware, in which he is the prime suspect.

Sanders was then transported to the jail and booked on two counts of criminal damage.