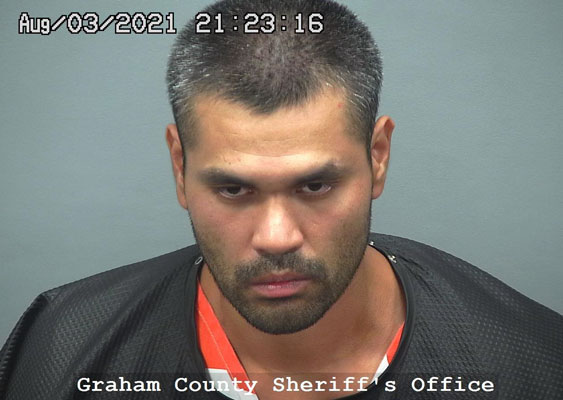 SAFFORD – A 28-year-old male was arrested and booked into jail on July 20 after reportedly using a compressed air duster as an inhalant in public.

Jesus Gambino Ramirez was booked into the Graham County Adult Detention Facility on a charge of inhaling a vapor releasing toxic substance.

According to a Safford Police report, officers were dispatched at about 6:47 p.m. to the Safford LDS Seminary building regarding a man who appeared to be under the influence of some substance.

Upon arrival, officers located Ramirez, who showed signs of impairment, with two cans of compressed air duster at his feet. Ramirez allegedly replied that the cans weren’t his and that they were there before he got there. He was then allowed to leave the scene.

Just a few minutes later, an officer observed Ramirez walking eastbound on 8th Street while holding a compressed air duster can up to his mouth to apparently inhale the contents. At that time, however, the officer had to respond to another call for service.

Police were then dispatched shortly afterward to the intersection of 10th Avenue and 8th Street for a man standing in the middle of the intersection. The man matched Ramirez’s description.

During his arrest, Ramirez allegedly advised that he regularly inhales compressed air duster and other aerosols to get high while being on probation.

According to the National Institute on Drug Abuse (NIDA), abusing inhalants can lead to sudden sniffing death by fatal heart failure.

The NIDA advises that inhalants affect the brain with short-term effects similar to alcohol, including slurred or distorted speech, lack of coordination, euphoria, and dizziness. People may also feel light-headed or have hallucinations, according to the NIDA.

What are the other health effects of inhalants?

Long-term effects of inhalant use may include:

In addition, because nitrites are misused for sexual pleasure and performance, they can lead to unsafe sexual practices or other risky behavior. This increases the chance of getting or spreading infectious diseases such as HIV/AIDS or hepatitis.