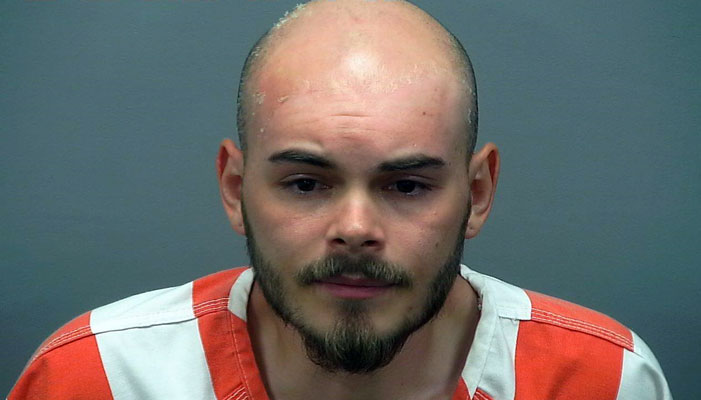 Contributed Photo/Courtesy GCSO: Miguel Garcia, 23, was booked on a charge of unlawful discharge of a firearm after allegedly shooting into the ground to scare a cat.

SAFFORD – A man who said he feared for his own safety from a feral cat was arrested and booked into the Graham County Adult Detention Facility on Thursday, July 29, after firing a handgun multiple times inside the city limits.

Miguel Garcia, 23, was arrested and booked on a charge of unlawful discharge of a firearm.

According to a Safford Police report, officers were initially dispatched at about 2:56 p.m. to the area of Central Avenue after a reporting party advised of hearing multiple gunshots.

Upon inspection, officers believed the gunshots came from Garcia’s residence. After nobody answered the officers’ knocks and calls, Garcia was spotted exiting the front door.

At that point, Garcia allegedly admitted shooting seven rounds into the ground to scare a feral cat that he said was foaming at the mouth and believed to be rabid. Officers located seven spent shell casings but were unable to locate any of the spent bullets.

Garcia allegedly said he was in his backyard watering plants when the cat came into his yard. He then pulled out his handgun from the back of the shorts he was wearing and fired it to scare the cat away, according to his comments to officers.

Officers examined the Taurus 9 mm pistol Garcia said he had used and found it was clear with no bullets in the chamber or magazine. Garcia also gave the officers ammunition from an ammo box.

Garcia insisted he fired the weapon in self-defense against the cat, however, the officer advised that Garcia could have simply gone back inside the residence to get away from the cat and that he committed an offense by discharging a firearm within the city limits unjustifiably. Garcia was then booked into jail.