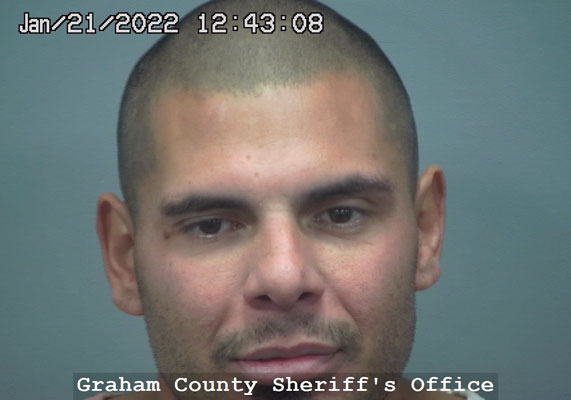 Contributed Photo/Courtesy GCSO: Edwin Rosendo Carrillo, 31, was booked into jail for criminal damage after allegedly breaking out car windshields during an altercation.

GRAHAM COUNTY – An argument between two men over alleged infidelity led to violence on Friday.

Edwin Rosendo Carrillo, 31, was arrested and booked into the Graham County Adult Detention Facility on a charge of criminal damage after allegedly busting out car windshields and a window on a fifth-wheel trailer door.

According to Graham County Sheriff’s Office reports, Carrillo told a deputy that he had become enraged with the victim due to the victim’s allegation that Carrillo had been cheating on his wife with the victim’s girlfriend – who happens to be his wife’s sister.

Carrillo said he went to the victim’s residence off S. Stockton Road to confront him about the allegations and ended up grabbing a metal pipe and breaking two car windshields at the residence. However, Carrillo denied breaking the door window to the fifth-wheel trailer. He said he knew who did break it but refused to inform the deputy of that person’s identity.

Deputies were initially dispatched at about 10:05 a.m. to the victim’s residence. Upon arrival, the victim said Carrillo was blaming him for problems Carrillo was having with his wife and tried to get the victim to come outside and fight. The victim said when he refused to exit the residence, Carrillo busted up the windows, including the trailer door window.

By the time deputies arrived at the residence Carrillo had left the scene but was found walking along Armory Road and was taken into custody. He was then booked into jail without further incident.