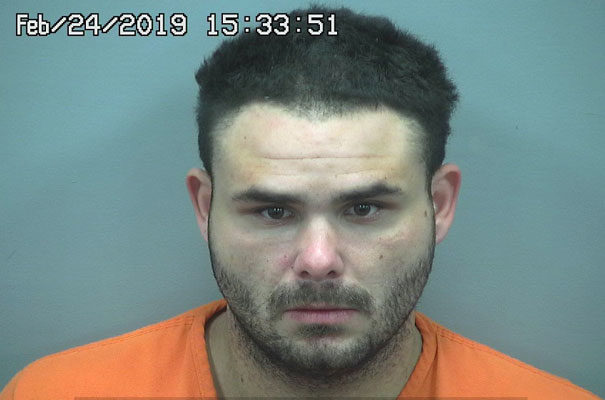 Contributed Photo/Courtesy GCSO: Donald William Garcia, 23, was booked into the Graham County Adult Detention Facility after allegedly assaulting his girlfriend while under the influence of methamphetamine.

SAFFORD – Donald William Garcia, 23, was booked into the Graham County Adult Detention Facility on Feb. 24 on a charge of assault after allegedly admitting to striking his girlfriend during a meth-fueled rage.

According to police reports, officers were dispatched at about 1:35 p.m. on Feb. 24 to a residence on 16th Street regarding a domestic situation. Upon arrival, the victim stated Garcia had struck her in her face. She later would add that Garcia held her in the residence’s bathroom against her will and caused multiple holes in the walls by punching them.

Garcia was taken into custody and two small empty baggies with white residue were located in his pocket. Garcia allegedly advised that both he and the victim had used meth the day before. He said they had been arguing and he had accused his girlfriend of cheating on him. He allegedly admitted to holding her in the bathroom and when she tried shoving her way through he said he “blacked out” and slapped her.

Garcia also advised that he became upset with his behavior afterward and then punched a hole in the bedroom wall next to the bathroom. He denied making the other holes located and said the victim had done those herself. The victim denied making any of the holes and said they were all done by Garcia that day. While he was being evaluated at the jail, Garcia reportedly told the medical staff that scratches on his hands were from punching walls.

Garcia was then booked into the jail on his above-listed charges.