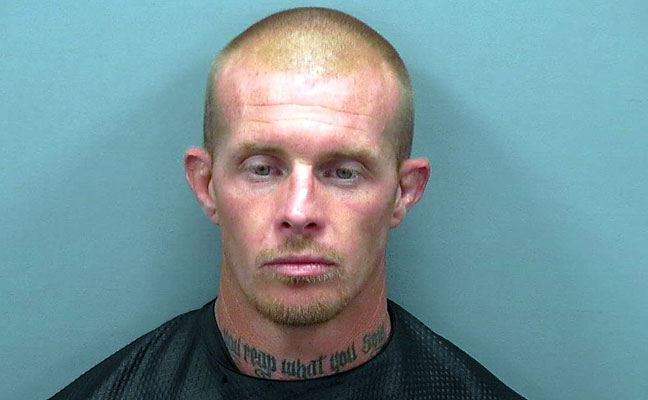 Contributed Photo/Courtesy GCSO: Kyle Wade Sollers, 35, was arrested and booked into jail on a warrant with additional charges of possession of a dangerous drug, possession of drug paraphernalia, and tampering with physical evidence long formed to the Graham County Attorney’s Office.

SAFFORD – A man was taken into custody by Safford Police during a traffic stop on June 12 after he allegedly attempted to swallow a baggie of methamphetamine.

Kyle Wade Sollers, 35, was arrested and booked into the Graham County Adult Detention Facility on a warrant out of Safford Justice Court that stemmed from a 2014 conviction for drug paraphernalia. Additional charges of possession of a dangerous drug, possession of drug paraphernalia, and tampering with physical evidence were long formed to the Graham County Attorney’s Office for review and charging.

According to online court records, Sollers failed to appear in court in November 2020 after being mandated substance abuse counseling in October 2020. A bond of $542 was then set and a warrant issued for his arrest. Records also indicate Sollers has an active case regarding possession of a narcotic drug and drug paraphernalia that was bound over to Graham County Superior Court in April 2020 from Pima Justice Court. However, no record of the Superior Court case was listed online.

On June 12, an officer conducted a records check on a white Ford Focus that was traveling on U.S. Highway 70 and learned the registered owner was Sollers who had the open warrant for the Safford Justice case. The officer then identified Sollers as a passenger in the car and advised that the vehicle also had a cracked windshield and had an air freshener hanging from the rearview mirror. While the air fresheners are designed to be hung in such a fashion, they are not supposed to be hanging from the mirror while the vehicle is in operation.

The officer then initiated a traffic stop. At that time, the officer advised seeing Sollers look back at him, and then take a drink and “shove something in his mouth quickly and took another drink of something.”

The officer then opened the passenger door, placed Sollers into custody, and ordered him to spit out the object in his mouth. After initially denying anything was in his mouth, Sollers spit out a bag that contained methamphetamine, according to the report.

The driver of the car, Andrew Hill, was found to have a suspended license for failure to pay fines and was given a citation and released. The vehicle was turned over to friends of Sollers who arrived at the scene later.

Sollers was then taken to jail and booked on his warrant with the additional charges forthcoming. He allegedly told the officer that he knew meth was in the baggie and that a female friend had left it in the car a few days prior. Ingesting methamphetamine in such a manner is dangerous and has been fatal to others who have done so and then been incarcerated, including at least one case in Graham County when a woman swallowed a baggie of meth without the officers’ knowledge and later died.