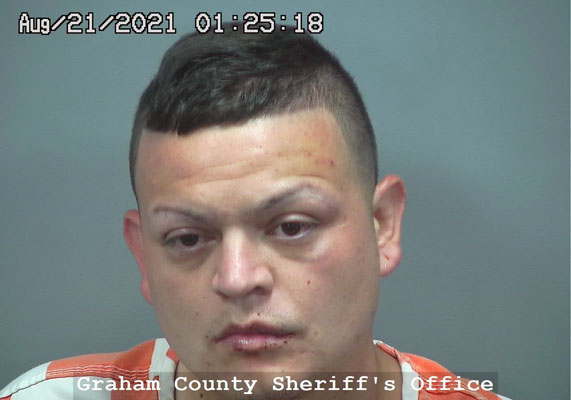 Contributed Photo/Courtesy GCSO: Ariel Macario, 31, was booked into jail on charges of aggravated assault and disorderly conduct with a weapon or instrument.

SAFFORD – A Safford man was arrested and booked into jail on Aug. 20 after he allegedly assaulted his mother and cut another person with a kitchen knife.

Ariel Macario, 31, was booked into the Graham County Adult Detention Facility on charges of aggravated assault and disorderly conduct with a weapon or instrument.

Officers were dispatched to a residence in the 2000 block of 9th Avenue at about 6:46 p.m. Upon arrival, an officer was directed into the home, where he saw two men struggling with Ariel. The men (who are Ariel’s brothers) asked the officer to get the knife away from the suspect, and the officer located a broken kitchen knife on the ground Ariel was attempting to reach. The officer kicked the knife off to the side and took Ariel into custody.

According to the officer’s report, Ariel’s sister advised he was intoxicated and was acting strangely as she was giving him a ride home and asked her if she wanted to fight him.

When they arrived at the residence, Ariel began to argue with his mother when she confronted him about punching a door and he allegedly punched her in her ribs and chest.

At that time, the driver advised she called her other brothers to come to the residence and calm down Ariel. The suspect then retrieved a knife from the kitchen and his mother locked herself in the bathroom and called the police. Ariel reportedly attempted to break down the bathroom door, and his sister attempted to stop him and was struck by Ariel, according to a Safford Police report.

The brothers arrived and confronted Ariel, who allegedly attempted to slice them with the knife, catching one of the men in the elbow. The three men were actively scuffling when an officer arrived. The man who received the laceration denied medical assistance.

While speaking with the witnesses, Graham County Dispatch advised that Ariel had just called 911 from the back of the officer’s patrol vehicle. The officer returned to his vehicle and took the cell phone from Ariel, who was then transported to jail and booked on the above-listed charges.