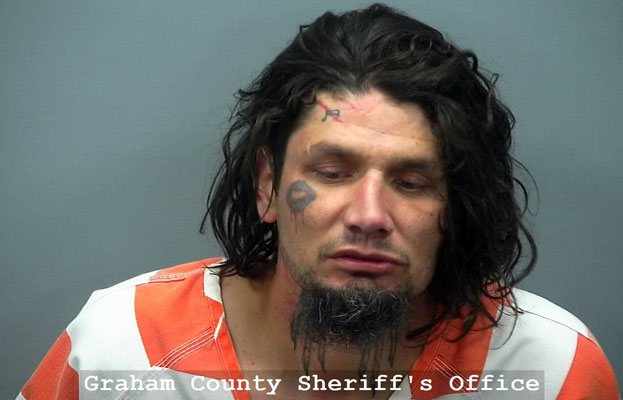 Contributed Photo/Courtesy GCSO: Angel Ace Gomez Jr., 36, has been charged with two counts of aggravated assault, and one count of unlawful imprisonment and is being held on a $100,000 bond.

SAFFORD – A Graham County deputy didn’t have to go far to charge Angel Ace Gomez Jr., 36, with multiple counts of aggravated assault early Sunday morning – Gomez was already in jail after being arrested by Safford officers on unrelated charges.

Gomez allegedly severely assaulted his girlfriend late Saturday night prior to having Safford Police called on him for disorderly conduct at his relative’s house at about 12:18 a.m. on Sunday.

On Tuesday, the Graham County Attorney’s Office officially filed charges against Gomez, including aggravated assault/disfigurement, aggravated assault/impede breathing, endangerment/substantial risk of imminent death, and unlawful imprisonment. The quick charging meant Gomez wouldn’t be able to be released on the 48-hour rule and instead is being held on a $100,000 bond.

According to a Graham County Sheriff’s Office report, a deputy was dispatched to Mt. Graham Regional Medical Center (MGRMC) at about 12:34 a.m. regarding a woman who had been assaulted.

Upon arrival, the victim was seen with multiple injuries, including a dark purple eye swollen shut, multiple bruising to her face, and red marks on her neck.

The victim advised that Gomez had been intoxicated and had assaulted her when they were getting a ride. The victim described the beating she suffered from Gomez and said he pulled her out of the car and onto the ground by her hair, punched and elbowed her several times in her face, and used his forearm to restrict her breathing to the point where she almost lost consciousness.

During the attack, the victim said she fought back and kicked Gomez and at one point managed to grab a rock and strike him, but he didn’t stop the beating until he was tired. She later was able to leave Gomez after he calmed down, she told the deputy.

By that point, Safford officers had already picked up Gomez after being dispatched at about 12:18 a.m. to a residence on 12th Street. Upon arrival, Gomez was seen yelling and then abruptly began to bang on the officer’s window.

The officer rolled down his window and believed Gomez to be under the influence of some type of drug. He threatened to TASER Gomez if he didn’t stop and Gomez was taken into custody. Upon nearing the patrol vehicle, however, Gomez began to resist and kicked the vehicle, causing a large dent in the rear quarter panel, according to the officer’s report. During transport to jail, Gomez allegedly continued to rant and rave and threaten the officer, and upon arrival, he was placed into a restraint chair. Possible charges of disorderly conduct and criminal damage are pending.

After leaving the hospital, the deputy interviewed Gomez at the jail and asked him about what had happened. Gomez reportedly denied striking his girlfriend and instead said he believed the male driver of the car they were getting a ride with punched him when he stopped the car. He said he was severely intoxicated and blacked out and didn’t remember anything that happened after the driver struck him, he reportedly told the deputy.

The deputy noticed abrasions on both of Gomez’s hands and that his right palm was scraped and he had a scratch on his forehead. The deputy then booked Gomez into jail on the aggravated assault and unlawful imprisonment charges.