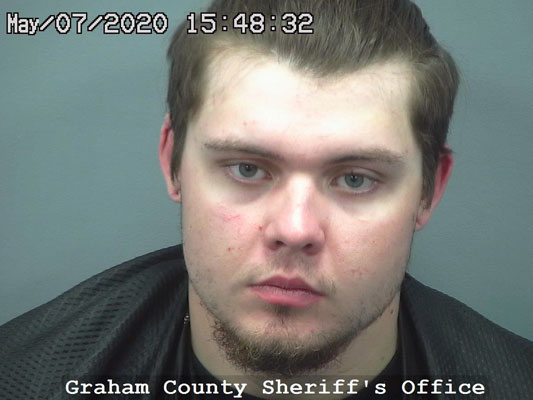 Contributed Photo/Courtesy GCSO: Spencer Green, 23, was arrested and booked into the jail on charges of assault, criminal damage, and disorderly conduct.

SAFFORD – Spencer Shawn Green, 23, was arrested and booked into the Graham County Adult Detention Facility on Thursday, May 7, on charges of assault, criminal damage, and disorderly conduct after allegedly assaulting his girlfriend. He had just gotten off probation from a 2016 aggravated assault conviction for assaulting a previous girlfriend roughly three months prior.

The new charges stem from an incident that allegedly occurred when a woman attempted to take an online test for college.

The woman described herself as Green’s girlfriend but that they had been separated. She said she went to their apartment, which is leased in her name, to perform her school test but advised Green wouldn’t leave her alone even though she made her intention that she didn’t want to deal with him clear.

Upon arrival at the apartment, the officer noted the victim had a bloody lip and a pocket of her clothing had been torn, reportedly during the struggle.

The officer located Green at his work and interviewed him regarding the alleged assault. Green advised that woman wouldn’t listen to him and then “went crazy and started screaming.” He reportedly told the officer that he attempted to leave to go to work and the woman bit him on the finger. He said her lip must have gotten bloody and clothing was torn when he tried to restrain her and get away.

Green was previously found guilty of aggravated assault regarding an incident that occurred in 2016. During that incident, he also denied assaulting his girlfriend at that time and said he just tried to hold her down to stop her from attacking him. However, according to the victim in that case and three other witnesses, Green actually struck the victim, choked her, pulled her by her hair and hit her head against his car. Green pleaded guilty in October 2016 and was placed on probation. According to online court records, that probation was terminated Feb. 4, 2020.

He also had an incident in 2015 where he was originally charged with assault, disorderly conduct, criminal damage, preventing the use of a telephone in an emergency, and trespassing, however, those charges were dismissed by the city attorney after Green pleaded guilty to violating his promise to appear on the charges and he was given probation.

After being interviewed, Green was arrested on the new assault case and was transported to the jail.