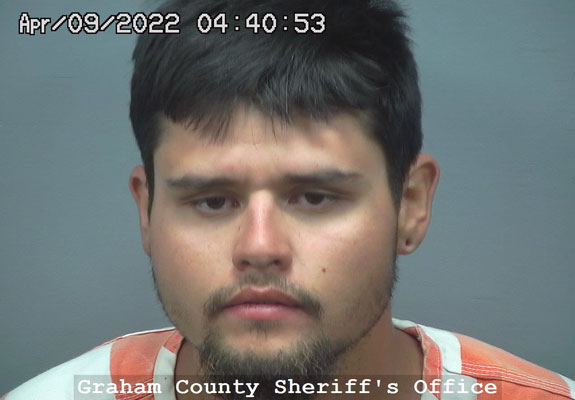 Contributed Photo/Courtesy GCSO: Charges of possession of a dangerous drug and drug paraphernalia against Michael Keith Holloway, 24, of Safford, were bound over to Graham County Superior Court.

SAFFORD – A man who was found in an apparent dazed, incoherent state in a local Circle K will be arraigned in Graham County Superior Court on charges of possession of a dangerous drug and possession of drug paraphernalia.

The charges against Michael Keith Holloway, 24, of Safford, were bound over to Superior Court on May 4 after his attorney, Daisy Flores, waived a preliminary hearing in the Safford Justice Court JP1.

According to a Safford Police report, on April 18, officers were called to the Circle K at 1324 S. 1st. Ave. at 9:23 a.m. regarding an unwanted subject who was “creeping out” employees and customers. When the officers arrived, an employee advised that Holloway had been standing with a blank stare, clenching his right hand and would not respond to any questions, and would not leave the store when directed to do so.

At that time, an officer informed Holloway he was trespassed from the store, however, Holloway did not show any change in his demeanor, according to the report. A records check showed an active warrant out of Pima County, however, it was non-extraditable. So, Holloway was given another chance to leave the store but continued to not move or speak.

The officer then placed Holloway under arrest for criminal trespass in the third degree and located a ziplock baggie containing nearly a gram of methamphetamine. Holloway was then transported to Mt. Graham Regional Medical Center, where he was medically cleared and booked into jail on charges of possession of a dangerous drug and drug paraphernalia.