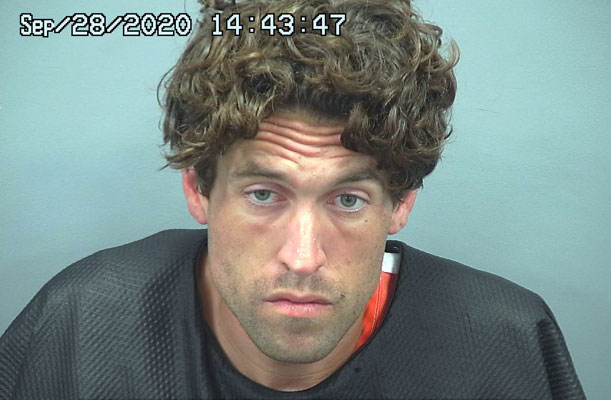 SAFFORD – A man in a truck stolen out of California led police on a high-speed chase with speeds exceeding 100 mph through school zones Monday morning.

The chase ended when the suspect’s tires were hit by stop sticks and he crashed into a San Carlos Police vehicle on U.S. Highway 70 at milepost 275 between Bylas and Peridot.

The suspect, Frank Garcia, 30, was arrested and booked into the Graham County Adult Detention Facility on three counts of excessive speeding, possession of stolen property, theft of means of transportation, reckless driving, endangerment, and unlawful flight from pursuing law enforcement.

According to a Safford Police report, officers were dispatched at about 7 a.m. to the Speedway gas station at 300 E. U.S. Highway 70 regarding a stolen Nissan Titan that was parked at the gas pumps.

As an officer arrived, the truck began pulling out of the station, and officers followed it as the truck made its way through town. A Safford officer then initiated a traffic stop at milepost 334 and the truck initially pulled over. While the officer approached, however, the truck suddenly accelerated and fled.

At that time, officers informed the Pima School Resource Officer of the situation, and the officer cleared the highway at the school zone just before the Titan sped through at approximately 105 mph through the 15 mph zone. Officers from Safford, Thatcher, and Pima pursued the truck as it continued through the Fort Thomas area and passed school busses and went into the oncoming lane of traffic. Local officers then discontinued the pursuit when the truck crossed onto the San Carlos Apache Reservation, and the San Carlos Police Department (SCPD) took over.

The SCPD set up stop sticks at milepost 275, and the stolen truck hit them and crashed into a police cruiser, closing the highway for a couple of hours.

After the crash, Garcia was released into the custody of a Safford officer, who then took him to jail.