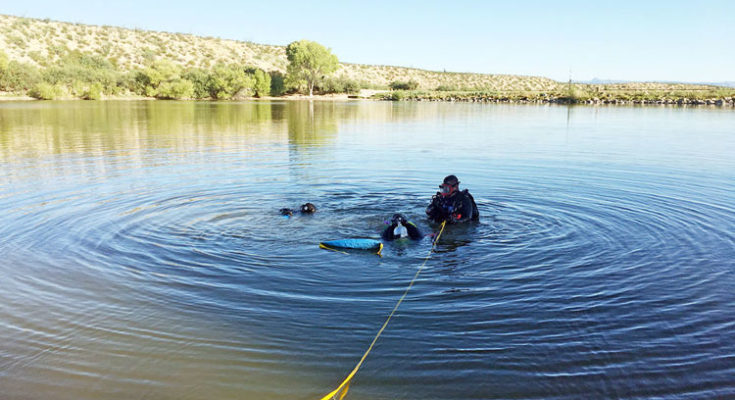 Photo By Sgt. David Noland CCSO: Divers with the Cochise County Search and Rescue Dive Team work to recover the body of Justin Parker, who drowned at Cluff Pond No. 3.

GRAHAM COUNTY – The body of missing swimmer Justin Michael Parker, 32,  of Thatcher, was recovered at Cluff Pond No. 3 on Friday morning.

Graham County Dispatch initially received word that Parker had gone under the water and failed to resurface at about 6:11 p.m. on Thursday. Emergency personnel from Lifeline Ambulance, the Pima Police Department, Graham County Search and Rescue, and Graham County Sheriff’s Office responded.

Parker reportedly had been swimming in the 15-acre pond with friends when the drowning occurred. The pond has an average depth of about 20 feet. According to a news release from the Sheriff’s Office, while swimming Parker stated he was struggling and was turning back. He continued to struggle and went under the water and never resurfaced.

The pond area was secured by law enforcement until daylight hours.

A dive team from the Cochise County Search and Rescue arrived at the scene at about 7 a.m. on Friday and located Parker within 10 minutes.  Parker’s body was removed from the pond at approximately 7:45 a.m. and was taken to Caldwell’s Funeral Home and will later be transferred to the Pima County Coroner’s Office for an autopsy. The Sheriff’s Office thanks all personnel who
responded with this tragic incident, with a special acknowledgment to the members of the Cochise County Sheriff’s Office Dive Team for their assistance.

Members of Parker’s immediate family have been notified of his passing.

Other drownings at the pond include Joseph Leyba, 27, in September 2014 and Benjamin Harrell, 73, in May 2011, after suffering a heart attack while fishing.