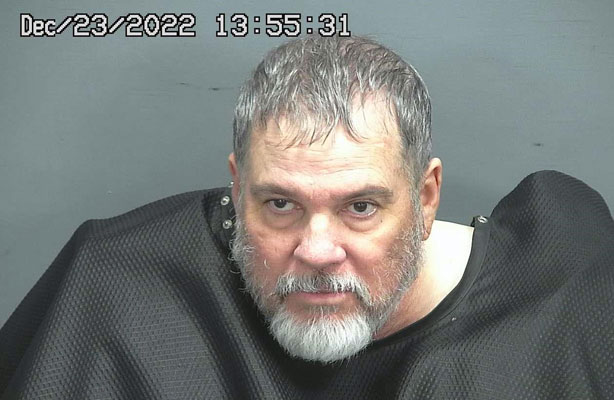 Bobby Benitez, 64, has been charged with the murder of Patty Nosie, 42, while he remains hospitalized from a self-inflicted gunshot wound.

THATCHER – Bobby Benitez, 64, has been charged with the murder of Patty Sue Nosie, 42, while he remains hospitalized by a self-inflicted gunshot wound.

Nosie was killed on Dec. 13 at her residence at 1510 S. Roadrunner Ln. in Quail Ridge where she lived with Benitez. She was found deceased inside the residence after a standoff between Benitez and officers ended with Benitez shooting himself. Her death was the result of a gunshot wound.

According to a Thatcher Police Department report, Nosie appeared to have been shot multiple times, with a gunshot wound to her left wrist, three gunshot wounds to her chest, and one gunshot to her back. It also appeared that she had a broken jaw. Nosie’s body was sent to the Office of the Pima County Medical Examiner the following day for an autopsy.

Benitez’s injury was non-life threatening and he was transported to Mt. Graham Regional Medical Center for treatment. As of Friday, Dec. 23, Benitez remained in custody at the hospital. Once released from the hospital, he will be formally booked into the Graham County Adult Detention Facility.

Officers were initially dispatched to the residence at 4:53 a.m. on Tuesday, Dec. 13, when Graham County Dispatch received a call from a man advising, “I just killed somebody, send the cops to kill me.” The call was later found to be made by Benitez.

Officers from the Thatcher, and Safford police departments were joined by a Graham County Sheriff’s Office deputy in responding to the residence and attempted to negotiate with Benitez, who appeared distraught over what had happened. According to various police reports, Benitez was heard saying, “Just shoot me,” and “I killed her. My life is over, she is driving me crazy.”

Benitez spoke with officers while in the doorway of the residence and at one point was convinced to put the handgun down inside the house. An officer then asked Benitez if he would sit in a chair on the porch and he did so. When asked if he would close the door, however, Benitez refused and after a couple of minutes his demeanor appeared to change, and he got up and began to move toward the front door, according to multiple police reports.

At that point, a Safford officer attempted to use his TASER but one probe did not connect, making it ineffective and Benitez went back inside the residence as officers fell back to their staging.

After roughly 5 to 10 minutes, Benitez reemerged from the residence and did not appear to be armed. He had his hands up and showed officers there was nothing in his waistband.

As Benitez was speaking with the officers for the second time, however, he pulled out his handgun from his back pocket, pointed it at his own chest, and shot himself while saying, “It’s over”, according to Safford and Thatcher police reports.

Benitez was then taken into custody and was treated at the scene by paramedics from Lifeline Ambulance, who also transported him to Mt. Graham Regional Medical Center.

After Benitez was taken into custody, officers cleared the residence and discovered Nosie’s body. A search warrant was later approved by Justice of the Peace Wyatt J. Palmer, and officers collected various spent ammunition casings, and the handgun as well as other evidence.

While at the hospital, Benitez allegedly told a doctor that he had shot Nosie because “she was driving him crazy.” However, when an investigator read him his Miranda Warning Benitez invoked his right to remain silent and requested he speak to an attorney. The investigator reported he then left Benitez in the care of the hospital and another officer.