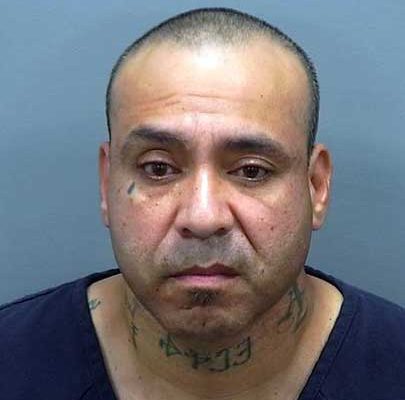 Contributed Photo/Courtesy GCSO: Eric Lopez was booked into the jail on drug charges, including possession of a dangerous drug for sale.

SAFFORD – In their effort to sweep drugs from the streets, the Safford Police Department officers attempt to apprehend dealers coming and going.

Late Saturday night, Eric Lopez, 44, was arrested on drug charges relating to the sale of methamphetamine after an officer located approximately 13.9 grams of meth, several empty small plastic baggies and a digital scale in a vehicle Lopez was operating.

It is common for an officer to pull a vehicle over for speeding, but on this bust, the officer noted Lopez was driving slower than the posted speed limit of 45 mph. An inspection of the license plate showed the vehicle’s registration was suspended and invalid.

The officer initiated a traffic stop and Lopez turned onto Apricot Loop at stopped at about 11:43 p.m. Upon approach, the officer saw Lopez reaching with his right hand in between the front seats. Fearing Lopez may be reaching for a weapon, the officer pulled his handgun and commanded Lopez to stop reaching and put his hands on the steering wheel.

After Lopez complied, the officer thought he might have a common drunk driver on his hands. However, after looking at Lopez’s eyes the officer did not see any signs of alcohol but rather that of methamphetamine use. Additionally, Lopez was sweating profusely and was rapidly speaking.

The officer then examined the vehicle and noticed what appeared to be a baggie with meth sticking out from under the center console. The officer then retrieved the meth and discovered the unused baggies under the console as well. The digital scale was found on the passenger’s seat.

Lopez allegedly admitted the substance was meth and said he ha used meth earlier that same day, according to the officer’s report. The suspect said he didn’t think there was that much meth in the bag, but it was more than the necessary threshold of 9 grams for an automatic sell charge for meth.