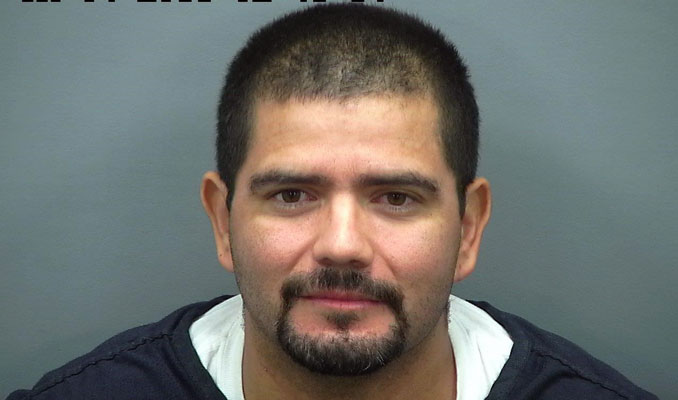 Contributed Photo/Courtesy GCSO: Henry Espinoza was booked into the jail on charges of possession of a dangerous drug and possession of drug paraphernalia.

SAFFORD – A welfare check turned into a drug bust after an officer was called to the Circle K at 1324 S. 1st Ave. on Tuesday, Dec. 3.

The reporting party called police at about 11:50 p.m. after noticing the same silver Nissan sedan with a “Raiders” sticker on its window parked in the parking lot for roughly 30 minutes.

Upon arrival, the officer initially saw the Nissan at the gas pumps but then noticed it back into a parking spot near the store’s front doors.

When contacted, the driver, later identified as Henry Espinoza, 33, said he was parked there because he was going to use the store’s restroom. When asked for identification, Espinoza pulled what appeared to be a meth pipe out of his pocket and dropped it into the door handle. At that point, the officer reported he could also see that Espinoza was holding a plastic container with meth in it.

After initially saying that he had found the meth and pipe in his car, Espinoza advised that he had used meth earlier that day and he was acting nervous because he had the drugs in his possession when the officer approached.

The vehicle was towed from the scene and Espinoza was booked into the Graham County Adult Detention Facility on charges of possession of a dangerous drug (methamphetamine) and possession of drug paraphernalia.