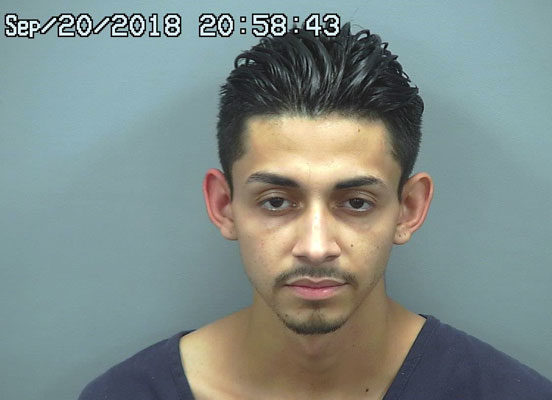 Contributed Photo/Courtesy GCSO: Landon Martinez was caught with 5 grams of heroin and a quantity of methamphetamine. He attempted to hide in a trash can while handcuffed but was apprehended by officers after a two-hour search.

SAFFORD – A search for a suspected heroin dealer involved K-9 dogs from the Arizona Department of Corrections and police from the Safford Police Department and Graham County Sheriff’s Office and ended after two hours when the suspect was located upside down in a garbage can.

Landon Asyael Martinez, 20, of Buckeye, led officers on a chase and search for two hours in Sunrise Village Mobile Home & RV Park on Thursday but was ultimately caught with 5 grams of heroin and a small amount of crystal methamphetamine.

Officers were initially dispatched to the park at about 8:08 a.m. after a manager and an anonymous caller informed them that a man was unconscious in a grey Honda Civic near the entrance and had been there for roughly 20 minutes. The anonymous caller wanted the officers to check on the man because he said the man looked “very ill.”

Upon arrival, an officer failed to locate the suspect’s vehicle but was then informed that the suspect, later identified as Martinez, had parked in front of a space in the park.

When the officer located Martinez, he was putting up a solar screen in the car. Martinez advised that he hadn’t been passed out but was instead looking at his cell phone while attempting to reach his friend who lives in the park. The officer noted Martinez showed tell-tale signs of heroin abuse, but Martinez initially denied using the drug.

After the officer pointed out injection marks on his arms, Martinez allegedly admitted to using heroin the previous night but denied having any more on him and said the only thing left he had on him were needles.

As the officer began to take Martinez into custody, the suspect initially resisted. He then advised he had heroin both in the car and in his shirt pocket, and the officer handcuffed Martinez with his hands behind his back. The officer then removed what later weighed 1.8 grams of heroin from Martinez’s shirt pocket. The officer also later located a small amount of methamphetamine in Martinez’s wallet.

Martinez was then placed in the rear of the officer’s patrol vehicle with the window down to allow the officer to speak with Martinez without having to open the door.

At that time, a woman in the driveway of where Martinez had parked came out and advised she was the mother of Martinez’s friend he had come to visit. Martinez asked if the woman could take possession of the car and the woman agreed to do so.

The officer then allowed the woman and a second individual to speak with Martinez through the window. When they were finished, the officer reported he rolled up the window and shut the door.

The officer then went back to Martinez’s car, where he located a digital scale and another package of heroin weighing 3.2 grams.

Soon after, the woman and the second individual yelled at the officer that Martinez was fleeing the scene, and the officer saw him running down the street. The officer secured the heroin and Martinez’s wallet and phone that were on top of his vehicle and radioed the situation to other units.

While officers scoured the park, followed tracks and searched multiple vehicles and residences, they could not locate Martinez. Eventually, they called in a K-9 Unit from the Arizona Department of Corrections to help with the search.

Officers had located Martinez’s flip-flops and later found a partial footprint near a garbage can. After opening the lid, Martinez was located upside down in the receptacle.