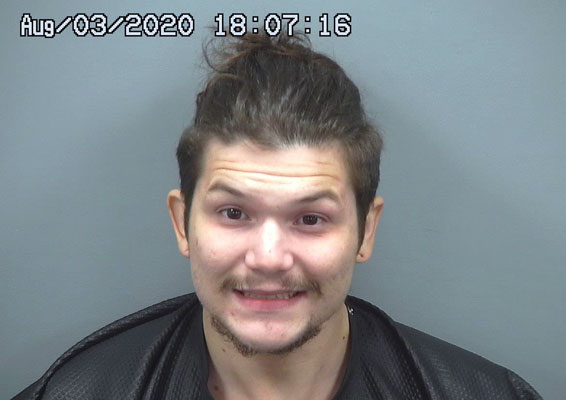 Contributed Photo/Courtesy GCSO: Michael Guerra, 28, was caught allegedly attempting to take heroin into the jail after being arrested for multiple warrants.

Was caught upon returning to Walmart, which he was previously trespassed from

SAFFORD – Michael Nicholas Guerra, 28, was arrested and booked into the Graham County Adult Detention Facility on Monday on multiple warrants and new charges of possession of a narcotic drug, promoting prison contraband, and possession of drug paraphernalia.

Guerra was wanted on multiple warrants relating to failing to appear in court to answer to charges of assault and disorderly conduct/fighting and multiple shoplifting charges.

On Monday, a Walmart asset protection employee noticed Guerra in the store and knew he had already been trespassed previously for shoplifting. The employee called the police, which arrived and located Guerra, who was wearing a gray tank top, shorts, and a mask.

After initially denying who he was, Guerra allegedly admitted who he was and was placed under arrest. At that time, the officer asked Guerra if he had anything illegal on him. According to the officer’s report, Guerra said he might have a syringe. The officer searched Guerra’s pockets and did not locate any contraband.

Guerra was then taken to the jail and upon being dressed out for incarceration a jail sergeant noticed something appeared to be in Guerra’s sock. Upon further inspection, the sergeant located three baggies of heroin. Guerra allegedly admitted he put the heroin in his socks two days before being arrested.

Guerra was then booked into the jail on his warrants, possession of a narcotic drug, promoting prison contraband, and possession of drug paraphernalia.