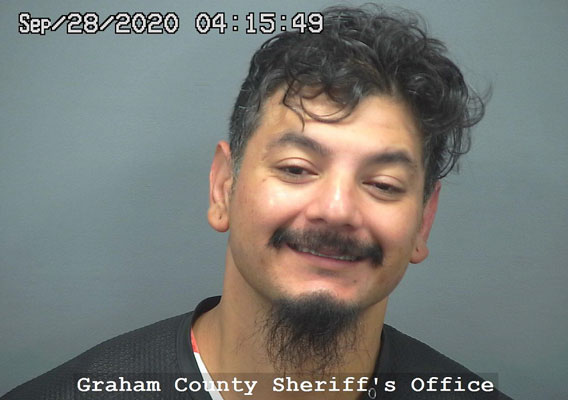 Contributed Photo/Courtesy GCSO: Jimmy Flores, 36, was arrested for possession of a dangerous drug and drug paraphernalia. He allegedly exclaimed the pants he was wearing weren’t his pants when a baggie of methamphetamine was found in his pocket.

“These aren’t my pants.”

SAFFORD – A man claimed the pants he was wearing were not his after a baggie of methamphetamine was found in one of the pockets.

Jimmy Arthur Flores, 36, was arrested and booked into the Graham County Adult Detention Facility on Monday, Sept. 28, on charges of possession of a dangerous drug, possession of drug paraphernalia, and failure to provide a driver’s license.

According to a Safford Police report, an officer was on Upper Solomon Road assisting a Graham County Sheriff’s Office deputy to locate a domestic violence suspect who had fled the scene just west of Montierth Lane on foot.

After not locating the suspect, the Safford officer noticed a slow-moving vehicle eastbound on Solomon Road at about 1:40 a.m. Upon closer inspection, the driver allegedly yelled at the officer for blocking the road. The officer informed the driver that they were looking for a suspect and when the officer asked him his name it was the same first name as the domestic violence suspect. The driver, identified as Jimmy Flores, told the officer that he was looking for another Jimmy and correctly identified the suspect. Flores then said he had done nothing wrong and drove westbound away from the officer.

After conferring with the deputy, the Safford officer decided to pursue the matter further and followed Flores in time to Flores stop in the crosswalk section of the intersection of Solomon Road and U.S. Highway 191.

The officer then initiated a traffic stop for the infraction and Flores declined to provide a driver’s license and instead said that he wanted his lawyer.

Feeling Flores’ demeanor to be confrontational, agitated, and unpredictable, the officer radioed for backup. At that time, Flores allegedly exited the vehicle and refused to follow the officer’s commands.

Another officer arrived and informed Flores he would be hit with a TASER shot if he didn’t comply, and Flores was taken into custody. A pat-down search revealed a baggie of methamphetamine in Flores’ right coin pocket, and a search of the car yielded a digital scale in the front console area.

Flores continued to say he hadn’t done anything wrong and that the police were in the wrong for illegally blocking the road.

While Flores was being placed into the patrol vehicle, he yelled at the officers that the pants he was wearing were not his pants. He was then transported to the jail without further incident and the vehicle was towed from the scene.