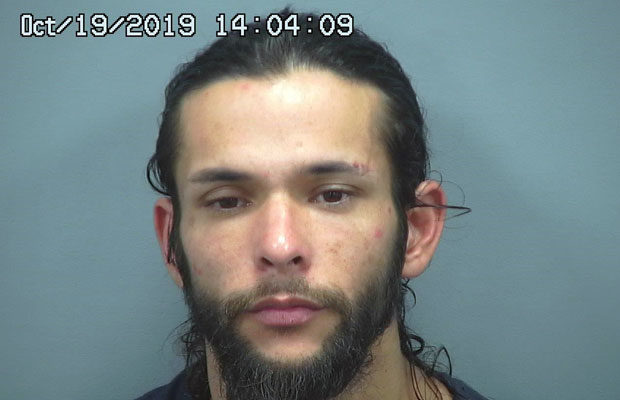 Contributed Photo/Courtesy GCSO: Jaime Rodriguez was booked into jail on a drug warrant after being contacted during a burglary investigation.

SAFFORD – Jamie Rodriguez, 29, was arrested on a warrant regarding possession of a dangerous drug (methamphetamine) and possession of drug paraphernalia after turning himself into police investigating a burglary.

According to a Safford Police report, an officer was dispatched to a residence in the 600 block of S. 3rd Avenue on Saturday, Oct. 19, at about 7:41 a.m. regarding a man coming upon a stranger in his home.

The victim said he had gone for a walk and when he returned he found a male subject in his living room “hovering” over an area where he keeps his prescription medications.

During the investigation, another officer noticed a male subject enter a neighbor’s house and when the officer attempted to contact the subject the man declined to come to the door. The officer believed the man to be Rodriguez and knew he was wanted on a felony warrant.

Eventually, a woman at the neighbor residence, Shelbi Marlene Boden, 20, was contacted. Boden, who the officer reported as being involved in a relationship with Rodriguez, allegedly said Rodriguez was not at the residence and would not allow the officer to enter to see for himself. A resident of the home also advised that nobody matching the description of the burglar had entered her home. A warrant check showed nothing at that time for Boden.

At that time, Boden reportedly followed the officers while they were taking Rodriguez into custody for his warrant and made snide comments toward the victim. Boden denied using any drugs but the officers believed she was under the influence of meth and Rodriguez allegedly repeatedly told her to “shut up” and that when Boden uses meth she can’t quit and uses too much.

Rodriguez was then transported to the Graham County Adult Detention Facility and booked on his warrant.

On Friday, a Graham County Sheriff’s Office deputy was dispatched to the Graham County Superior Court to take custody of Boden on a warrant regarding possession of a dangerous drug (methamphetamine) and possession of drug paraphernalia. Boden had previously signed a plea agreement on the case but has had multiple warrants issued and is yet to be sentenced, according to online court records.

She was taken without incident and booked into the jail on her most recent warrant that was issued that day.