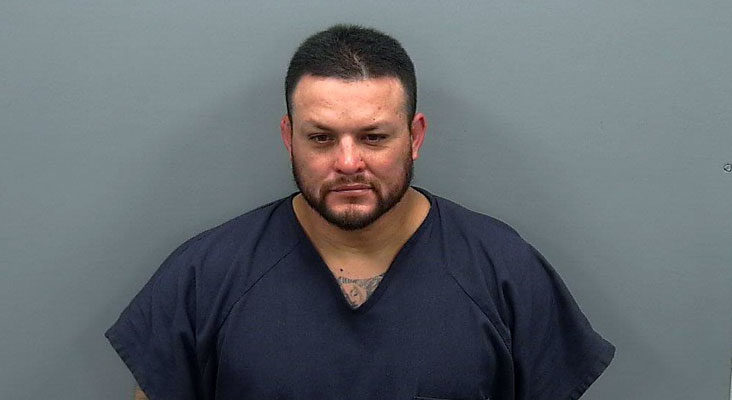 Contributed Photo/Courtesy GCSO: Pete Montez Jr. was booked into the jail on drug and weapons charges.

SAFFORD – Pete Anthony Montez Jr., 35, of Safford, was arrested and booked into the Graham County Jail on Wednesday, Nov. 7 on two counts of misconduct involving weapons, possession of a narcotic drug (cocaine) possession of drug paraphernalia, and driving on a suspended license.

According to a Safford Police report, Montez was westbound on U.S. Highway 70 in a lifted, white pickup truck traveling at about 45 mph in a 35 mph zone. An officer performed a traffic stop and the truck pulled into the east side of the Walgreens parking lot at the intersection with 20th Avenue.

Upon inspection, the officer identified Montez and noticed a box of rifle shells in the truck with him. The officer recognized Montez as a prohibited possessor of firearms – which includes ammunition – due to past felony charges and asked if there were any guns in the truck. Montez advised there was a hunting rifle and that he was going to go hunting the next day.

During a search, the officer located two hunting rifles along with roughly 69 rounds of ammunition. The rifles were identified as a Springfield 1903 and a Savage Axis – both of which had high-powered scopes and were kept in their cases to avoid being damaged.

As the officer was detaining Montez for being in possession of the firearms, he located a small plastic baggie in Montez’s shirt pocket that contained cocaine.

Montez was allowed to call his father to the scene to remove his personal items out of the truck before it was towed and put in a mandatory impound. Montez was then taken to jail.