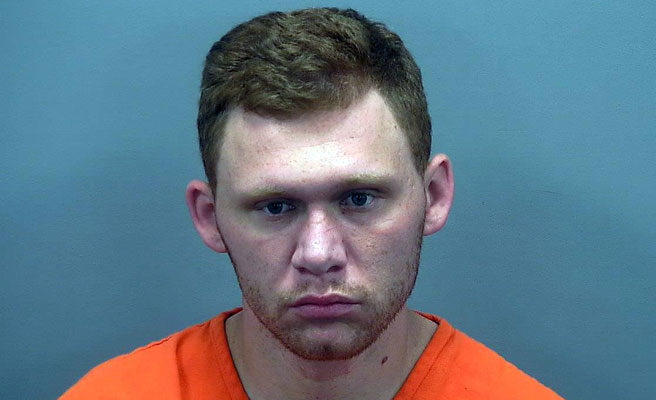 Contributed Photo/Courtesy GCSO: Andrew Anderson, 27, was booked into the Graham County Adult Detention Facility on charges of burglary, criminal damage, and criminal trespass after the victim recognized him from video surveillance footage.

SAFFORD – The owner of Cricket Insurance at 1210 W. Thatcher Blvd. had an inclination that her daughter’s boyfriend was the one responsible for a previous break-in of the business but she couldn’t prove it.

After the first violation, the owner installed surveillance cameras and lo and behold a man resembling her suspected perpetrator soon showed up burglarizing the residence in the early morning hours of Saturday, May 25.

According to a Safford Police report, the owner spoke to an officer about the burglary at about 9:12 a.m. She said she was out of town but received an alert on her cell phone regarding someone tripping the motion detection camera. The man in the video inside the business was wearing a long sleeve gray and red shirt with a black hat and had his face partially covered with a bandanna. Even with the bandanna, however, both the owner and officer each easily recognized the burglar as Andrew Michael Anderson, 27, of Thatcher, who was previously on probation for attempted theft of a credit card.

The officer located Anderson at his residence in the Twin Palms trailer park in Thatcher and arrested him for criminal trespassing.

The officer then showed Anderson the video and asked why he was in the building. Anderson denied being the person in the video and said the burglar had his face covered so nobody could tell who he is.

During the interrogation, the officer noted Anderson appeared to have several fresh injection marks on both arms. Anderson allegedly admitted to using heroin but said his last hit was four days ago. Anderson was then booked into the Graham County Adult Detention Facility on the single charge of trespassing.

Later on that same day, the owner had returned to the area and advised that she had located the shirt the burglar was wearing in the video in her daughter’s dirty laundry and the hat he was wearing was found in Anderson’s truck. The daughter claimed that she had been asleep when Anderson allegedly committed the burglary and didn’t know he had left the residence.

The owner also advised that the business was missing $340 from a blue bank bag that had been in a cabinet that was found with its lock broken.

The officer then responded to the jail and added additional charges of burglary and criminal damage to Anderson’s booking sheet.