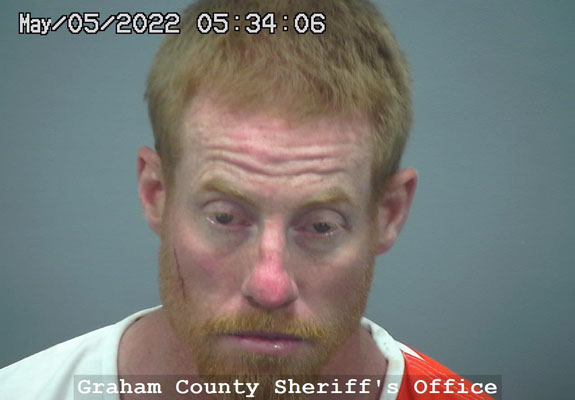 Contributed Article/Courtesy GCSO: Stuart York was booked into jail after crashing a truck while fleeing from pursuing police officers.

THATCHER – A police pursuit that extended through Thatcher and Pima to an unincorporated area south of town ended after the suspect crashed his truck the evening of May 4 and was found soon after hiding in his parents’ trailer.

The suspect, Stuart Edward York, 42, of Pima, was wanted on a petition to revoke his probation when he fled from a Thatcher officer. According to a Thatcher Police report, the officer was eastbound on U.S. Highway 70 at about 10:10 p.m. when he noticed a white GMC truck immediately pull into the parking lot of the Holiday Inn Express. The officer believed the truck was attempting to evade the officer, so he followed as the truck drove through the parking lot and then went back onto the highway in the other direction heading westbound out of town.

York continued westbound, however, as the officer called for other units. After failing to make a turn onto a dirt road in Central, York then turned on 300 South and then headed south on Main Street in Pima.

The Thatcher officer was still behind when York failed to navigate a turn onto Cluff Ranch Road and instead continued onto a dirt side road. At that point, pursuing officers had to back off due to the amount of dust that was put into the air by the speeding truck.

York was then picked up by a Pima Police officer, who advised York had wrecked at the intersection of Grandma Drive and Cluff Ranch Road. Upon inspection of the truck, however, York was nowhere to be found.

Enter the Thatcher officer’s K9 partner, Apollo, who followed tracks from the truck to a trailer in the 200 block of S. Cluff Ranch Road. There were several dogs barking outside the trailer, and the occupant – a woman – advised that she hadn’t seen anybody come onto her property. Later, however, the officer learned that the residents of the property were York’s parents, and the truck was registered to his father.

After speaking back and forth with the occupants of the trailer and not finding York anywhere else on the property, Apollo hit on the trailer and “pulled hard toward the entrance”, according to the report.

After further discussion with the occupants, the officers were advised York was hiding behind a couch. At that point, the officer positioned Apollo by the front door and warned York that he would be bitten by the dog if he didn’t surrender. At that point, York reportedly stood up from behind the couch and was taken into custody without further incident.

York was already on probation for a previous charge of unlawful flight from pursuing law enforcement that he plead guilty to in April 2020 and for a charge of possession of a dangerous drug that he plead guilty to in January. By April 12, there was a petition to revoke his probation in the drug case, and on April 18 a warrant was issued for his arrest. Upon his incarceration, another petition to revoke his probation was filed.

During interrogation, York allegedly admitted to using crystal methamphetamine that day and that he was fleeing from the police because of his warrant.

After being medically cleared by the hospital, York was booked into jail on charges of reckless driving, unlawful flight from pursuing law enforcement and leaving the scene of an accident. Additional DUI charges are pending blood test analysis.