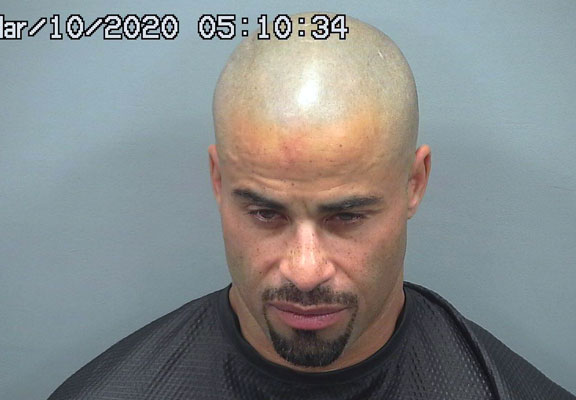 Contributed Photo/Courtesy GCSO: Eric Baum was booked into the Graham County Adult Detention Facility on a charge of DUI.

“You ain’t sticking a (expletive deleted) needle in my arm without a fight!”

SAFFORD – An unruly man detained for a DUI investigation fought against having his blood drawn for testing purposes but, in the end, the officers got their sample and the man was booked into jail.

Eric Baum was pulled over in the early morning hours of Tuesday, March 10, after a concerned citizen informed Graham County Dispatch of a possibly inebriated driver in a gold-colored Jeep that had just left the Walmart parking lot.

An officer who was eastbound on U.S. Highway 70 toward another call for service noticed the Jeep pass him westbound at 52 mph in a 35-mph-zone.

The officer turned around and stopped the Jeep for speeding and located Baum as its driver. Baum appeared to be under the influence of alcohol, and, after failing a field test, was arrested for DUI. Baum refused to take a portable breath test at the scene, and his vehicle was impounded.

Once at the Safford Police Department, Baum became argumentative, according to the officer’s report, and refused to consent to a blood test. After requesting a lawyer, Baum was given a phone book to look for an available attorney but instead attempted to tear the book to no avail.

After receiving a warrant to take a sample of blood, Baum warned the officer that he would not comply with the warrant.

Additional officers were called to help procure the sample and Baum allegedly told them, “I have had my (expletive deleted) whooped for far less. You ready? You ready?”

Baum then allegedly resisted as officers attempted to handcuff his hands behind his back and had to be taken to the ground. The handcuffs were then applied and his blood was taken.

Baum was then transported to the jail, where he blew a .109 breath/alcohol concentration on a portable breath test and was booked into the facility without further incident.