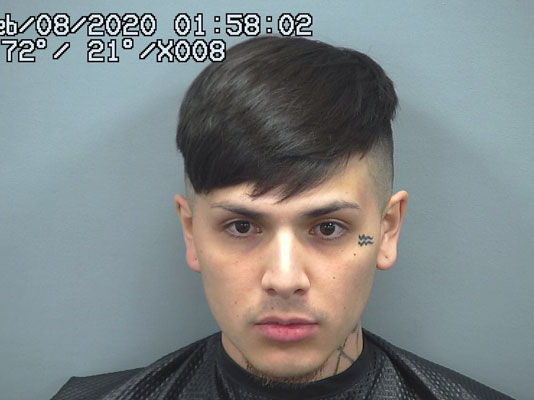 Contributed Photo/Courtesy GCSO: Erique Alva, 21, was arrested and booked into the jail on charges of kidnapping, aggravated assault, and criminal damage – all under the domestic violence designation.

SAFFORD – A woman advised she went to confront her boyfriend about his drinking Feb. 7 and ended up in the Emergency Room of the Mt. Graham Regional Medical Center.

An officer was dispatched to the hospital at about 9:30 p.m. regarding the assault. Upon arrival, he located the victim, who he described as having a “beaten and disheveled” appearance and was suffering from a laceration above her right eye, multiple abrasions to her face and forearms and small cuts on her hand.

The victim said she had gone to her visit with her boyfriend, Erique Alva, 21, to confront him about his drinking and found him intoxicated and angry. An argument ensued and Alva asked her to leave, according to her statement to police. The woman said she left and ate dinner to allow Alva to calm down and then returned to his residence.

Upon her return, she said Alva continued to drink and smoke concentrated marijuana “dabs” from a “bong” (water pipe) and the pair again argued. She said the argument then turned physical as Alva pushed her into a kitchen table. She said Alva then picked her up so she was upside down and dropped her headfirst onto the floor in a “piledriver” fashion, which is how she received the laceration above her eye.

The victim said Alva continued the attack and hit her with a chair and then threw her Apple 10X iPhone out the window, shattering it. She said Alva then locked the door and would not let her leave. The victim said after a while Alva told her to get cleaned up before she left and slapped her and forced her into the bathroom to wash. He then retrieved her damaged cell phone and gave it back to her and allowed her to exit the residence. The victim said she went home where she lives with her grandmother, who then took her to the hospital. The victim also advised that she didn’t want to press charges against Alva. The officer later learned the victim’s laceration had to be closed with five stitches.

After speaking with the victim, an officer went to Alva’s residence and located the suspect. Upon entry, the officer noted the strong odor of marijuana as he de-armed Alva of a pair of brass knuckles and a pocket knife.

Alva allegedly admitted to having an altercation with his girlfriend and said they “got into it a little bit.” He also said he told the victim to leave several times before “things got out of hand” and they “both got aggressive with each other” and “things blew up.” Alva also said he had videos of the encounter on his cellphone, which he shared with the officer.

In the videos, Alva is shown asking his girlfriend to leave the residence multiple times and also shows Alva grab onto her arm during the first visit. The videos also show Alva smoking “dabs” from a bong.

A portable breath test showed Alva’s breath/alcohol concentration to be .10 and afterward, he was transported to the Graham County Adult Detention Facility, where he was booked on charges of kidnapping, aggravated assault, and criminal damage.