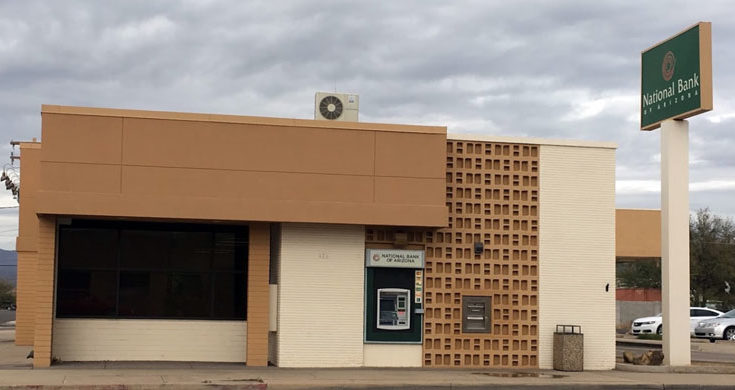 Contributed Photo: A man was arrested and booked into jail after reportedly causing a disturbance at the National Bank of Arizona in Safford.

SAFFORD – A man was arrested and booked into the Graham County Adult Detention Facility after reportedly caused a scene at a local bank and then later attempted to run from police officers.

Andrew Jackson Gilbert, 53, was arrested and booked into the jail on a charge of disorderly conduct.

According to a Safford Police report, an officer was dispatched at about 1:30 p.m. on Feb. 6 to the National Bank at 426 W. 5th St. regarding a disorderly subject. Upon arrival, the officer was informed that Gilbert caused a scene after having trouble withdrawing $40 from the automated teller machine outside of the bank and had come inside to complain.

As a bank employee assisted him in withdrawing the money, Gilbert reportedly caused a scene by pounding on a desk, pacing around the employee and getting in her personal space, yelling, and throwing his card at her. After receiving his money, Gilbert left prior to the officer’s arrival, however, the bank requested Gilbert be trespassed from the facility and advised his accounts were going to be closed and they would no longer carry him as a customer.

Shortly after leaving the bank, the officer heard a call for service regarding a man who was harassing construction workers at the Mt. Graham Shopping Center. The man fit Gilbert’s description, but, upon arrival, he could not be located.

At about 2:37 p.m., the officer was called back to the National Bank because Gilbert had returned and was causing a scene again after being informed his accounts were going to be closed.

Gilbert fled the bank prior to officers’ arrival, but he was seen running northbound on 5th Avenue. An officer responded to the area near the St. Rose of Lima Catholic Church and saw who he believed to be Gilbert walking through the complex.

The officer gave chase and tackled Gilbert. Additional officers then arrived on the scene and Gilbert was transported to the Graham County Adult Detention Facility, where he was booked on a single count of disorderly conduct.