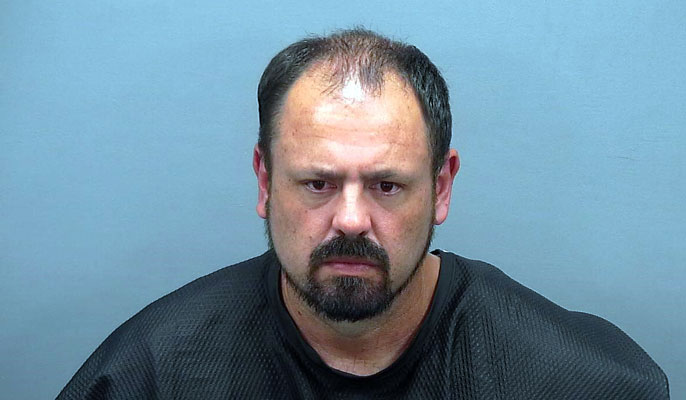 Contributed Photo/Courtesy GCSO: Michael Gutierrez was booked into the jail on aggravated assault charges after allegedly striking his ex-girlfriend and her new boyfriend with his car.

SAFFORD – A Pima man was arrested for aggravated assault after allegedly striking his former girlfriend and her new boyfriend with his car on Wednesday, May 20.

Michael Gutierrez, 41, was arrested and booked into the Graham County Adult Detention Facility on a charge of aggravated assault/domestic violence.

According to a Safford Police report, the victims said Gutierrez arrived at the new boyfriend’s residence after calling his ex-girlfriend and the new boyfriend answered the phone. Gutierrez claimed that he went to the residence at the request of his former girlfriend, who he said asked for him to pick her up from the location.

According to the victims, when Gutierrez arrived, they exited the residence. The new boyfriend advised he had his dog with him and he went to confront Gutierrez. At that time, he said Gutierrez got back into his vehicle and struck both victims and the dog with the driver’s side front fender. Both the male and female victims showed signs of injury and the female had what appeared to be tire marks on her right arm. The woman was later taken to Mt. Graham Regional Medical Center for additional treatment.

After striking the couple, Gutierrez allegedly drove a short distance before returning and apologizing to his ex-girlfriend. He then left the scene.

As the officer was investigating the incident, he received information that Gutierrez had called and reported the incident and was with a Graham County Sheriff’s Office deputy.

Gutierrez allegedly told the deputy that his ex-girlfriend had called him for a ride and when he arrived at the residence the new boyfriend came out with his dog and attempted to get the dog to attack him. Gutierrez said he got into his car and attempted to strike the man with his car but ended up also hitting his ex-girlfriend and the dog. During his contact with Gutierrez, the deputy began a DUI investigation, and, as a result, placed Gutierrez under arrest for DUI. Formal DUI charges are pending blood test analysis.

Gutierrez was taken to the Graham County Adult Detention Facility, where he was interviewed by the Safford officer and allegedly said the same thing. He also advised that when he went back to apologize the man threatened him with a wooden object, so he left.

Both victims denied that the male attempted to get his dog to attack Gutierrez.