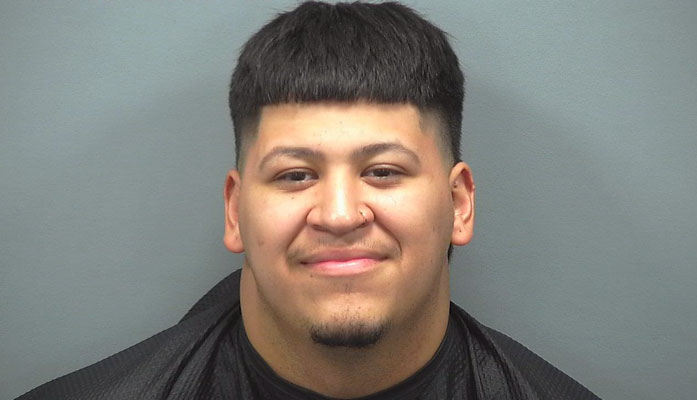 SAFFORD – Patrick Rene Villescas, 20, was arrested in the early morning hours of July 18 after he allegedly broke the living room window of his ex-girlfriend’s residence.

According to a Safford Police report, Villescas was banging on the victim’s windows and yelling for her current boyfriend to come outside for a physical altercation when the criminal damage occurred.

Officers were dispatched to the victim’s residence at about 4:53 a.m. and while en route learned that Villescas had just broken the window.

Upon arrival, Villescas was located bleeding from a cut and was taken into custody. He was later treated by paramedics at the scene.

Villescas allegedly told an officer that he had broken up with the victim a few months ago and saw her new boyfriend’s vehicle in the parking lot. He said he wanted the new boyfriend to come out and talk with him but he would not come out and that he broke the window on accident.

The victim advised she was with her new boyfriend and also had her toddler son with her when Villescas began banging on her windows and yelling. She said she took her son upstairs and called the police. At that time, she heard her living room window break. A neighbor also advised seeing Villescas outside of the residence yelling and banging on the windows.

After being medically cleared, Villescas was booked into the Graham County Adult Detention Facility on charges of disorderly conduct, criminal damage, and harassment. He entered a plea of not guilty on July 20 and is still being adjudicated in Safford Municipal Court.