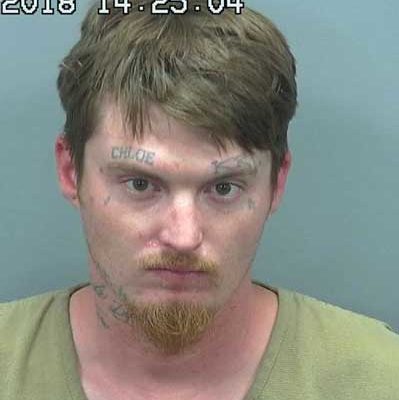 SAFFORD – If anyone needed an audition tape to appear on the “COPS” television show, this might be it.

Kevin Salmon, 27, was arrested and booked into the Graham County Adult Detention Facility on Sunday, June 17, after allegedly assaulting his girlfriend and then causing a ruckus at her residence in the early morning hours.

An officer was initially dispatched to a residence on W. Crimson Canyon Drive at about 3:12 a.m. regarding criminal damage. The victim said her boyfriend, Salmon, had broken a window in the backyard while intoxicated. The officer located a broken window under a porch that led to the residence’s bedroom and then made contact with the victim, who appeared visiably upset and scared.

The victim said Salmon had assaulted her earlier in the night when they were at McDonald’s and that she left him there and went home. The officer noted he could see the victiom’s cheek was swollen from where she said Salmon struck her.

She said shortly after she got home, Salmon  arrived and banged on the doors and broke the window. Officers searched the area for Salmon, who also had an active warrant for his arrest out of Gila County, but he was not located.

After the rest of the officers cleared the area, the initial responding officer stayed parked in his unmarked patrol vehicle across the street. After a few minutes, the officer heard a noise by the garage and then saw the victim walk out and exclaim, “get the (expletive deleted) out of here.”

Accordign to the officer’s report, he then heard Salmon yell profanities at the victim as he saw the shirtless man chase the victim as she ran toward the front door. The officer quickly responded with his duty weapon drawn and ordered Salmon to the ground.

Once in custody, Salmon claimed he was the one who had been assaulted but also admitted to breaking the window and that he possibly struck the victim when he exited her car.

Salmon was then transported to the jail and booked without further incident.