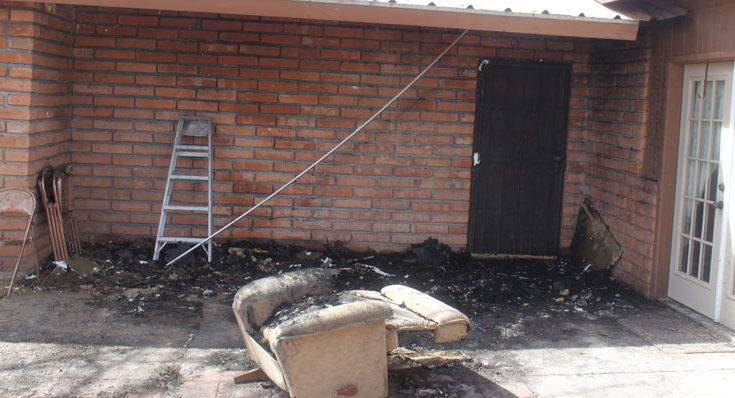 FORT THOMAS – A long-time pillar family of Fort Thomas was displaced early Tuesday morning when the home of Marland “Honk” and Roberta Norton caught fire. The residence is located in Fort Thomas in the 1300 block of Blackrock Road.

Graham County Dispatch alerted first responders to the blaze at about 1:09 a.m. after receiving a 911 call from Roberta. She advised everyone was out of the home and nobody was injured.

Volunteer firefighters from Fort Thomas, Pima, and Thatcher fire departments were rousted from their slumber and traveled to the site to battle the blaze. Paramedics from Lifeline Ambulance were staged at the scene as customary as a precaution for those fighting the fire.

According to friends, the Nortons are currently staying with their daughter and a GoFundMe page has been set up as the home suffered heavy smoke damage from the fire and has been declared a total loss. Click here to visit the GoFundMe page.

Firefighters described the blaze as originating in the attic and the insulation kept smoldering. A neighbor advised that homes in the area have had problems with rodents chewing through electrical wires and that a nearby home that was just recently rebuilt was damaged by fire in that fashion. While no official cause of the fire was given by Fort Thomas Fire Department, evidence at the scene – including tripped circuit breakers and comments from Roberta about the displays being off on appliances – show that the fire was most likely started by the electrical wiring.

Fire crews were reportedly on scene until about 5:30 a.m.

Honk is a legendary basketball coach and teacher who spent 30 years at Fort Thomas High School and recently wrote a book about “Rez ball” titled “Apache ReZ-Ball: Apache Wild Wind Basketball”, which details how Honk transformed a team of basketball novices into state champions. His teams won the state basketball championship in 1963 and 1967 and were runners up in 1962, 1966, and 1969.

Some of his accolades include being in the National Coaching Hall of Fame and serving as the president of the Arizona Coaches Association and served on the Executive Board of the High School Athletic Coaches Hall of Fame.

He was born in Bryce and played basketball for Eastern Arizona College and Arizona State University on a scholarship, where he graduated with a degree in education and met Roberta. Somehow, he also carved out two years to serve in the United States Army.

He also served as the president of the Mt. Graham Regional Medical Center Foundation board. Both Honk and Roberta retired from the Fort Thomas School District.