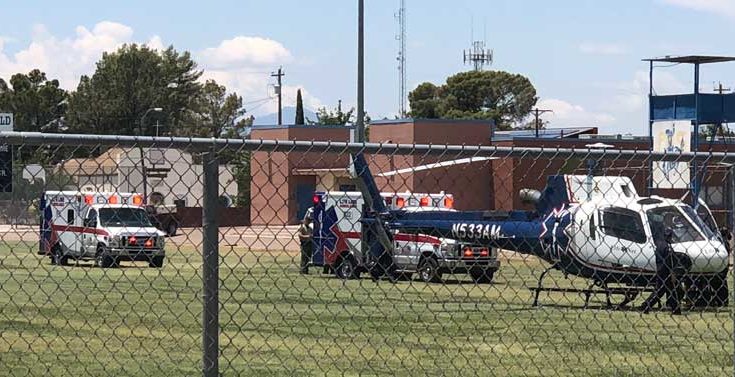 Jon Johnson Photo/Gila Herald: A LifeNet helicopter waits for the transfer of a patient from Lifeline Ambulance at Pima’s Edd Hubbard Field.

PIMA – Sirens rang out throughout Pima on Monday as paramedics with Lifeline Ambulance and LifeNet helicopter medical transport responded to a medical call.

According to a Graham County Sheriff’s Office report, Lifeline paramedics responded to a residence off Klondyke Road after Alice Withers, 44, was found unconscious and unresponsive on the floor of her motorhome by her mother.

At about 11:52 a.m., a LifeNet helicopter landed at Pima High School’s Edd Hubbard Field and waited for the ground ambulance to arrive. Withers was then transferred to the helicopter and was flown to Tucson Medical Center (TMC).

As of 3 p.m. Thursday, Withers was listed as being in critical condition at TMC, according to a hospital public information officer.