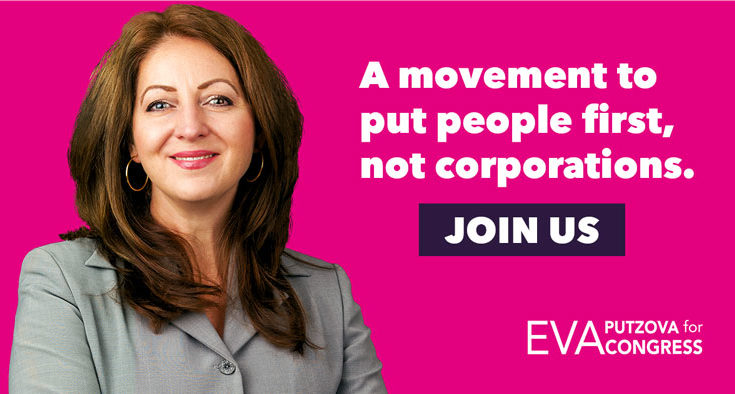 Photo By Eva Putzova For Congress

Right now, we are living in one of the most dire times in modern history. Over 100,000 people have died in the United States because of COVID-19. Millions have lost their jobs with little reprieve from the federal government. Throughout the country, protests are taking place to bring attention to another national crisis — mounting racism and police brutality against people of color. All of this is made only more dire in the context of climate change, which politicians have failed to take seriously so far. Now, more than ever, we need strong candidates capable of tackling all of these issues in order for generations to come to have a fighting chance at an equitable world.

I met Eva Putzova for the first time a year ago and was impressed by her honesty and enthusiasm. It is immediately apparent that Eva is who she claims to be, and that’s a hardworking progressive deeply concerned with the direction our world is headed if we don’t address climate change soon. Most meaningful about her plans to tackle climate change is her platform to advocate for true indigenous sovereignty. Native Americans have been taking care of this land far before politicians began brokering deals with big oil in violation of our treaties, and true climate justice must include reinstating Native Americans as leaders on this issue. As a U.S. citizen with Cherokee heritage, I fully support Eva to bring a sense of urgency to Congress to help save our planet.

Eva Putzova is running for Congress in Arizona’s congressional district one on a Green New Deal, First People First, and No More Wars grassroots campaign. Someone who doesn’t take money from corporate lobbyists and super PACs can be trusted to help make these ideals a reality.

Editor’s Note: Eva Putzova, of Flagstaff, is running against incumbent Tom O’Halleran for the Democratic nomination for U.S. House of Representatives Congressional District 1, which includes Graham and Greenlee counties.