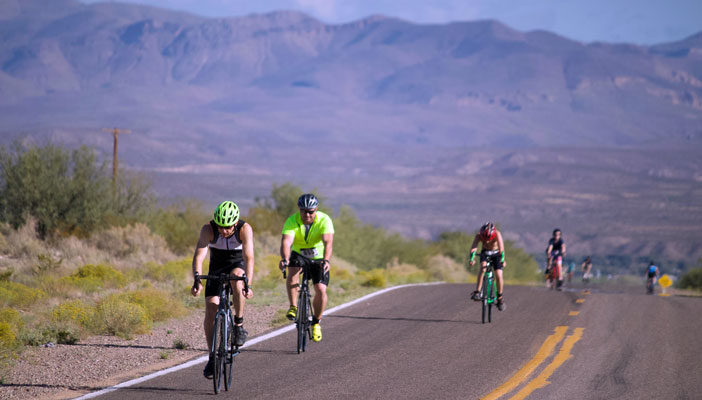 Jon Johnson Photo/Gila Herald: Racers enjoy the gorgeous weather during the bike portion during the 2019 event.

PIMA – Today, Thursday, Sept. 16, is the last day to sign up for this year’s Tri Community Tri.

The 12th annual Tri will be held this Saturday, Sept. 18, in Pima. This will be the Tri’s triumphant return after having been canceled last year due to the COVID-19 pandemic. Click here to sign up for this year’s event.

“It’s a great starting event,” Brian Paull previously told the Gila Herald. “There’s a route for new beginners to the sport and (the Sprint) is long enough for those who are seasoned to get a good challenge . . . The overall winner (in 2019) actually is using this specifically for a warm-up to do a longer race,” he said.

If the sprint distance is still out of one’s reach, there is a mini distance that is a favorite for children as well. The mini includes a 75-yard swim, followed by a 6-mile bicycle ride, and finished with a 1.5-mile run. Medals will be awarded for mini contestants under the age of 15 who finish in the top three in each age bracket for males and females.

Bobby Gonzales, of El Paso, blew away the competition in 2019 with a course record 1:00:19 – absolutely demolishing the fastest time in 2018 of 1:17:02 by Eric Bingham, who was absent from the event after taking part in it four previous times.

Coming in second for the men overall in 2019 was Thomas Riggs, of Willcox, who finished in 1:13:46. Rounding out the podium was Dale Oldham of Tucson, who bested his second-place time from 2018 but still fell to third place with a 1:15:10 finish. This was Oldham’s third time competing and the second time his children joined him in racing.

On the women’s side, consecutive three-time champion Melinda Nelson did not compete in 2019 due to another commitment, which opened the door for a new champion. It could have been a race to the finish as the 2019 overall female winner, Jessica Balls, finished in 1:20:00, which was faster than Nelson’s first-place time from 2018 of 1:20:23. Of course, Nelson was pregnant and in her second trimester at the time.