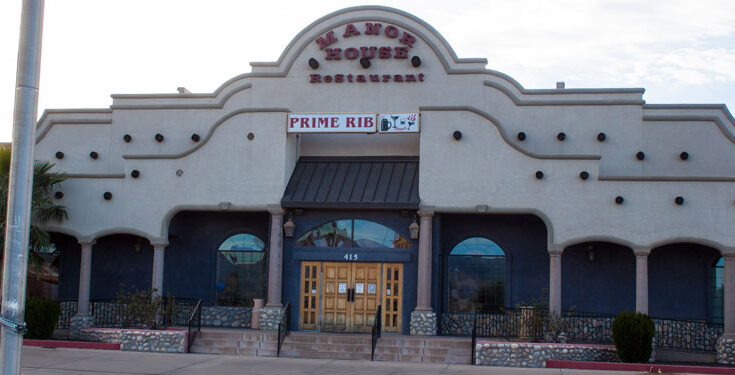 Jon Johnson Photo/Gila Herald: The Manor House served its last customer under previous owners Dean and Mary Lou Krieg as the keys were handed over to Jon and Andy Haralson on Monday.

SAFFORD – After 43 years of owning the community staple known as The Manor House, Dean and Mary Lou Krieg have sold the business to Jon and Andy Haralson.

The Krieg’s daughter, Tammy Mayhew, was the longtime manager of the restaurant and event center, after first starting as a cook and dishwasher at the tender age of 13 in 1980 when the Kriegs purchased the original building from Joyce and Charlie Brown. The original building was built in either 1950 or 1953, according to Mayhew.

On Monday, after spending countless hours every week at the facility, Mayhew handed over the keys to Jon Haralson, along with a copy of an original signed menu.

“It was a beautiful place to go and shared a lot of wonderful community events and events for people and families, and it was a wonderful experience,” Mayhew said. “And it’s time for somebody else to do that for our community.”

A placard of the five cowboys; Bobby Bell, Ronald McEuen, Melvin Angle, Hugh “Bub” Hamman, and Gary Curtis, will remain at the establishment, however, Bell’s cowboy hat and boots were taken down and presented to his grandson.

“Some of the most wonderful people came through the door, whether it was the back or the front – customer or team member – that we could ever ask for or ask to know,” Mayhew said.

The facility was renovated in 2000 and the old building fit on the outdoor patio and was bolted to the new building for a time. Mayhew said when the renovation was complete, the biggest question was if the bathrooms were still outside as they previously were.

“Dean and Mary Lou did everything to invest in our community,” Mayhew said. “They did in the people and in real estate and things they brought to the community to try to make it a better place to live. And I believe that they were very successful at it.”

Now that she no longer is tethered to The Manor House, Mayhew said she will likely hit the open road with her husband as he does runs for her son Clay Mayhew’s business, Magnum Towing, and is working on writing a second book. Mayhew has one book under her belt already, “My Suite A$$” about stories from her long career in the hospitality business. The book is available on Amazon.

In addition to writing her second book, Tammy Mayhew said she looks forward to spending more time with her three children and seven grandchildren.

“I have worked more than 40 hours a week since I was 13-years-old,” she said. “It’s time for family and other dreams.”

The next chapter for The Manor House is yet to be written, but moving forward it will now have an new author.

Jon and Andy Haralson told the Gila Herald that they plan on moving their Maverick Motorsports facility over to The Manor House location. In addition to Maverick Motorsports, they also own and operate Haralson Tire and Trek RV, which are all located nearby on U.S. Highway 70.

“We were very happy to purchase The Manor House building from Dean and Mary Lou Kreig,” the Haralsons wrote in an email to the Gila Herald. “We are grateful for their families’ time and contribution to our community over the years. I can remember going to eat at the original location with my dad (Jack Haralson) and uncle (Vernon Haralson), which was many years ago.”

“We are planning to move Maverick Motorsports over, as it will provide much-needed space and more. It is a beautiful facility with so many opportunities. At this point, we are in the planning phase to find how we can best utilize the space.”

“We are so appreciative of our community and look forward to serving you from a new location down the road.”