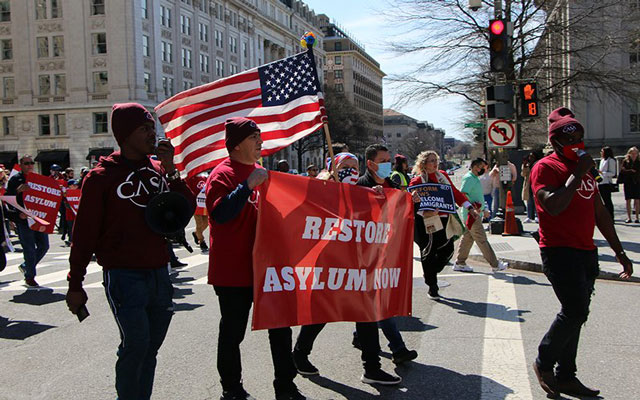 File Photo By Camila Pedrosa/Cronkite News: Several dozen protesters marched down Pennsylvania Avenue from the Trump International Hotel to the White House earlier this week to call for an end to Title 42. But Arizona’s senators said Thursday that while Title 42 should be lifted eventually, that should not happen until facilities are in place to handle the likely surge in migrants.

WASHINGTON – Arizona’s senators urged the White House this week to keep a controversial border control policy in place unless the administration is prepared to handle the surge in migrants that would come from lifting Title 42.

In their letter Thursday to President Joe Biden, Democratic Sens. Kyrsten Sinema and Mark Kelly said Title 42 should end eventually, but not until “you are completely ready to execute and coordinate a comprehensive plan that ensures a secure, orderly, and humane process at the border.”

The senators’ letter puts them at odds with advocates who have long demanded an end to the policy that one called “a cruel relic” of the Trump era. Under Title 42, border officials can turn back immigrants who potentially pose a health risk by entering the country.

More than 1.7 million migrants have been turned away since the policy was enacted in March 2020. Critics say the policy exposes migrants to violence when they are turned away at the border while doing little to protect the U.S. from COVID-19, particularly as cases here are falling sharply.

Katharina Obser, director of the Migrant Rights and Justice Program for the Women’s Refugee Commission, agrees with the senators that there “should be coordination and planning … to ensure that there’s a plan if Title 42 is lifted.” But she said it is long past time to halt the policy.

That could come within weeks. Although it is enforced by the Department of Homeland Security, Title 42 was invoked by the Centers for Disease Control and Prevention as a public health measure at the height of the pandemic. The CDC reviews its order every 60 days, and the next review is coming up in early April.

But with COVID-19 infections on the decline and with the CDC reporting that 69.6% of Americans age 5 and older having received at least two doses of the vaccine, the senators said changes could come as early as next week. That would leave border communities grappling with thousands of migrants if DHS is not prepared, they said.

“A sharp end to Title 42 without a comprehensive plan in motion would significantly increase the strain on DHS, border communities, and local nonprofits that are already near or at capacity,” the senators wrote.

The letter pointed to Customs and Border Protection data that show Title 42 was used to turn away more than 170,000 migrants in January and February, adding that about 30% of those cases occurred in Arizona.

Calls seeking comment Friday from DHS and CDC were not immediately returned.

A statement from Sinema’s office Friday said while DHS provided the senators with “some information … both remain unsatisfied the preparation and planning will result in a secure, safe, fair, and humane situation at the border.”

The senators also criticized what they called a lack of communication between DHS officials and local government leaders and community organizations in Arizona that provide goods and services to assist migrants.

Other members of the state’s congressional delegation also expressed disappointment in DHS’ response to Title 42 – but for vastly different reasons.

Rep. Debbie Lesko, R-Peoria, said Friday that she also wrote to the administration last summer when reports first surfaced that it might lift Title 42. She insisted that it be kept in place, saying the policy “is critical to protecting our communities and must continue to be enforced.”

On the other end of the spectrum, Rep. Raúl Grijalva, D-Tucson, weighed in after the administration said earlier this month that it would no longer enforce Title 42 against unaccompanied minors who show up at the border.

“It’s time to immediately end Title 42 for adults and families once and for all and overhaul our immigration and asylum-seeking process to be just, humane and fair,” he said in a statement then.

Kelly and Sinema agreed that Title 42’s “emergency authority should not be in effect indefinitely. Many expelled migrants have been waiting in limbo for months or years in dangerous locations, making them vulnerable to exploitation.”

But they said lifting it without a plan to handle the likely surge in migrants would create “chaos at the border” that would harm both immigrants and border communities. Until resources are provided to protect border communities from “unnecessary burdens,” the senators said, “it is premature to consider changes to Title 42 authorities.”