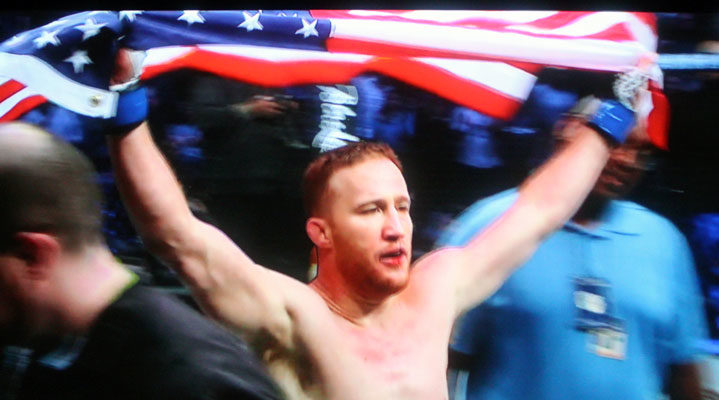 Justin “The Highlight” Gaethje waves the American flag after his victory over Edson Barboza Jr. on Saturday night.

PHILADELPHIA – It took Safford native Justin “The Highlight” Gaethje just 2:30 to dispatch the pride of Rio de Janeiro, Edson Barboza Jr., in the first round of the co-main event at UFC Fight Night on ESPN on Saturday as a heavy right hook found its mark on the chin of Barboza.

No. 8-ranked Gaethje (20-2) came into the fight as an underdog against No. 6-ranked Barboza (20-7) and both fighters came out with vicious leg kicks and both swung for the fences.

While Barboza is known as a striker, he should have done his homework and known when a fighter goes toe-to-toe with Gaethje it does not bode well. In his previous fight in August 2018, Gaethje knocked out James Vick in the first round as well.

Gaethje had Barboza on his skates for most of the fight after hurting him early with a big right to Barboza’s eye. After exchanging leg kicks and punches in the middle of the octagon, Gaethje again had Barboza on his heels and struck him with a big right hook that sent the Brazilian to the floor. As Gaethje stood over a dazed Barboza, referee Keith Peterson quickly moved in and called the fight as a knockout for Gaethje.

“I love this,” Gaethje said after the fight. “I love it and I’m so proud to represent the United States of America against Brazil’s top martial artist. I couldn’t ask for a better country to represent.

Afterward, Gaethje questioned why the UFC had recently moved Donald Cerrone to the number 7 spot ahead of him for beating a number 15-ranked fighter. With his demolishing of a well-respected Barboza, it appears Gaethje has a point that top-dog Dana White should listen to.

For his part, Gaethje said he is ready and more than willing to take on everybody ranked in front of him.

“There’s five or six guys in front of me (and) I want each and everyone of them,” Gaethje said.

While Gaethje said he wouldn’t advise anyone to follow in his footsteps, he was built to be exactly where he is.

“I would not recommend this sport to my enemy but I was born and I was bred and I was raised to do this, and I will do it until the wheels fall off,” he said.

He made his MMA debut Aug. 20, 2011, with a knockout slam against Kevin Croom and amassed a 7-0 amateur record. He signed with the WSOF on Jan. 22, 2013, and quickly rose to become its inaugural lightweight champion with a first-round knockout of Richard Patishnock in January 2014. Gaethje then successfully defended his title five times, as well as a non-title defense because his opponent didn’t make weight and finished with a 10-0 record before taking his talents to the UFC.