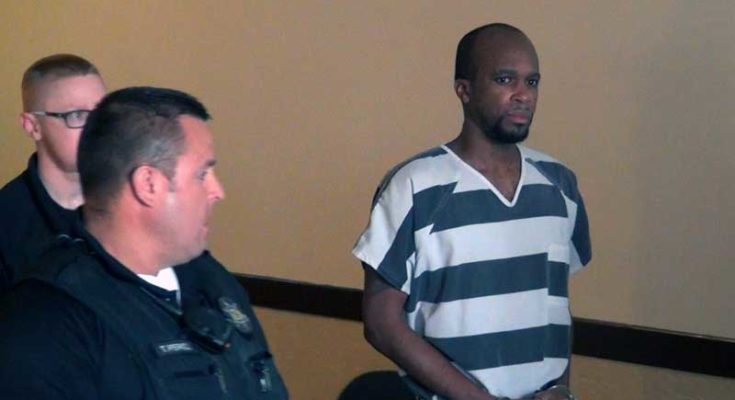 Jon Johnson File Photo/Gila Herald: Salih Abul-Haqq Zaid is escorted into the courtroom for a hearing last year. His appearance was vastly different as he appeared at his murder trial Monday wearing a suit, tie, and glasses without any restraints.

SAFFORD – Clad in a grey suit with a pink tie, a bespectacled Salih Abdul-Haqq Zaid, 40, looked more like a college professor or a statistician than a cold-blooded killer. But I suppose that was defense attorney Dennis McCarthy’s point; to make sure his client would not be in restraints or typical prison clothes to send a message of innocence to the jury, which is made up of 11 women and five men. One of the only thing that would give a sense that Zaid wasn’t there to sell dictionaries was the appearance of the three armed detention officers who traveled with the defendant.

What can’t be gussied up, however, is the mountain of exhibits loaded up on a table across the courtroom from the jury, with its glaring AK-47 rifle prominently displayed along with various amounts of ammunition, a handgun and other pieces of evidence.

Zaid is accused of shooting Jared Michael Garcia, 35, to death outside of the Bull Pen bar at 912 W. Thatcher Blvd. in the early morning hours of April 26, 2017, after getting into an altercation with Garcia inside the bar. He is being held in custody on a $1 million bond and is charged with first-degree murder, aggravated assault with a deadly weapon, aggravated assault, endangerment, disorderly conduct with a weapon, and discharging a weapon within city limits.

In court Monday for the fourth day of trial after two days of jury selection, the jury was shown an interrogation interview of Zaid conducted by detectives Josh McClain and Bill Wren. During the interview, a somewhat jovial Zaid recalled various calls he had been on as a paramedic and his demeanor in the video showed a much more callous individual than the one portrayed in the courtroom.

Zaid made several disconcerting remarks regarding the people he had to assist punctuated by the repeated use of profanity throughout.

Later during the interrogation, Zaid brought up the Columbine school shooting in Colorado and said one of the first students shot was a person who would stand by and do nothing as bullies picked on the other students. Zaid said he would not ever stand by and said that his bullies at the bar were stupid because they should have realized that someone, somewhere would end them for their actions.

According to the prosecution, Zaid left the bar after the altercation in his Ford F-150 pickup truck and drove to his residence at the 8th Street Apartments, where he allegedly retrieved firearms and ammunition. An AK-47 rifle loaded with a 30-round magazine and a .357 revolver were later recovered from Zaid’s truck after he was taken into custody by Safford Police. An autopsy report from the Pima County Medical Examiner’s Office showed Garcia didn’t have any powder burns on his body, suggesting he was at least three feet away from Zaid when he was shot. The single gunshot wound entered Garcia’s left side and exited the right side of his torso. Witnesses at the scene reported that Zaid baited Garcia to come toward his truck in the parking lot and saw Zaid shoulder a rifle and shoot him. They said they saw Garcia put his hands up and turn to run just before the fatal shot occurred.

Zaid admitted during the interrogation that the whole situation was “stupid” and that mistakes were made on both sides. His attorney is attempting to justify the shooting as self-defense.

Through the playing of the interrogation video, it was difficult to get a read on the jury’s reactions, as they appeared to play it close to the vest. There were parts where Zaid demeaned women and overweight people, but even though the jury has its share of people in those categories there was no visible reaction noted.

The prosecution wasn’t able to get through the entire interrogation video Monday as the court recessed at 3 p.m. due to other matters, but it was continued Tuesday.

Graham County Superior Court Judge Pro Tem D. Corey Sanders has banned cell phones, cameras, and any electrical recording equipment from the courtroom during the trial, which is scheduled to run for three weeks.