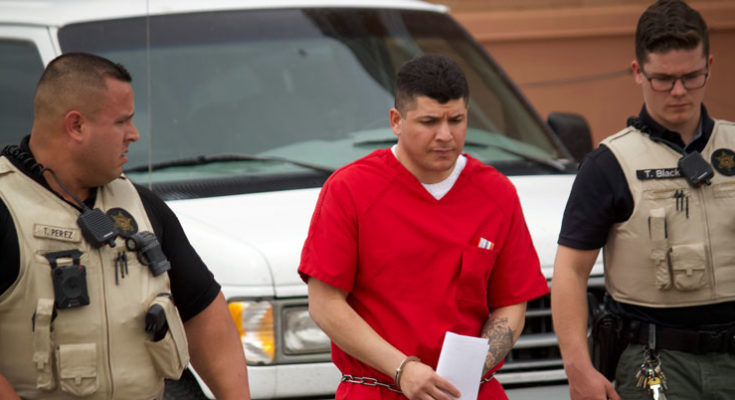 Jon Johnson Photo/Gila Herald: Eric Alvarez is escorted by two detention officers back to the jail to await transfer to ADOC. Alvarez was sentenced to 24 years in prison for child molestation.

SAFFORD – Eric Alvarez, 36, asked Graham County Superior Court Judge Michael D. Peterson for a lenient sentence due to his age and Judge Peterson acknowledged it as a mitigating factor. However, Judge Peterson advised that the young age of the victim, along with other aggravating factors, vastly outweighed Alvarez’s mitigators and sentenced him to a maximum aggravated term of 24 years in prison for child molestation.

Alvarez was initially arrested and booked into the Graham County Adult Detention Facility on Dec. 18, 2018, after investigators with the Graham County Sheriff’s Office learned he had molested an 11-year-old girl on at least four separate occasions the previous week.

During sentencing Monday afternoon, Graham County Chief Deputy County Attorney L. Scott Bennett said Alvarez’s crime was especially heinous due to what had previously happened to the victim, who was herself injured and had lost her sister in a vehicular crash caused by her father who was intoxicated. With her father sentenced to prison, Alvarez moved in and took over the role as father, furthering the viciousness of the crimes eventually perpetrated against her.

“Under those circumstances, I find his conduct particularly offensive,” Bennett said.

Alvarez’s defense attorney, Josi Lopez, argued for leniency and advised her client was willing to go through whatever counseling deemed appropriate and that a lighter sentence would still ensure punishment with a higher possibility of rehabilitation.

Lopez said such a sentence would, “put him in a position to get him the counseling that would be needed to ensure the community would be safe.”

Through a translator, Alvarez expressed his desire for a mitigated sentence to the court and said he was a family man who took care of his family, including a daughter in Mexico, and that he desired a shorter sentence because he is 36 years old and he stated he will need his strength upon his release to provide for his family once again.

After considering the mitigators and aggravators as well as Alvarez’s willingness to take responsibility for his actions, Judge Peterson said he gave significant more weight to the aggravators and sentenced Alvarez to the maximum allowable term of 24 years in prison with credit for 140 days of pre-sentence incarceration in the Graham County Adult Detention Facility.

“I was very pleased with Judge Peterson’s sentence on this case,” Bennett said. “This was a heinous crime and society needs to be protected from anyone who would commit this act on a child, and the judge recognized that.  With his sentence, Judge Peterson joined the Graham County Attorney’s Office in sending the message that this conduct will not be tolerated in our community. This case represents a lot of very hard work from a lot of people, not the least of which was detective Mike Cochran and all the other fine deputies of the Graham County Sheriff’s Office. These cases are truly tragic and will have consequences that last much longer than the 24-year sentence, I am just grateful that the judge saw it the way the I saw it and sentenced the defendant to the maximum aggravated term.”

After sentencing, Alvarez was fingerprinted and was then taken back to jail to await transport to an Arizona Department of Corrections facility.