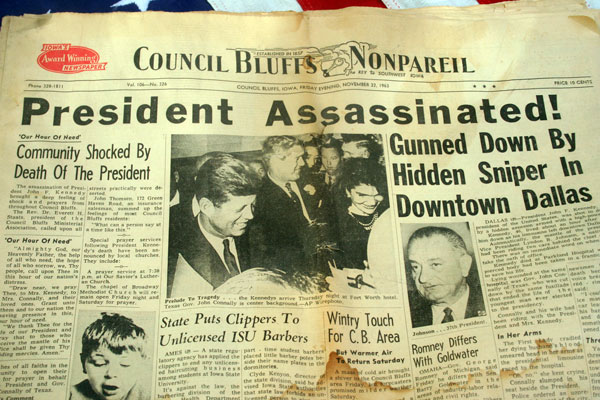 Walt Mares Photo/Gila Herald: This photo is of a copy of a Nov. 22, 1963, newspaper with big, heavy headlines telling of the assassination of President John F. Kennedy. The paper was the Council Bluffs Nonpareil in Iowa. The killing shocked the world.

It happened more than a half-century ago. In fact, it was exactly 58 years ago. I was 10 years old.

Since that day, Nov. 22, 1963, I have not been able to stomach chicken-flavored Rice-A-Roni. That was what my mother had prepared for my lunch that day. I used to love the flavor of chicken Rice-A-Roni. But that day I just could not eat, which was highly unusual for me.

I had just learned that President John F. Kennedy had been assassinated in Dallas, Texas. I remember feeling numb. The idea of JFK being killed was just too much for my young mind to absorb.

We lived about a half-mile from the school in Romeo. Almost every student went home for lunch. We all ran home, especially the kids who lived about a mile away in the southern part of town.

There was a sagging fence on the north side of our house. It was perhaps 2-1/2 feet tall. I imagined myself being quite the athlete as I bounded over it every day at lunchtime. What was unusual that time was my mother greeted me on that side of the house. She would usually be in the kitchen when I came home.

She was in tears. For the life of me, I could not figure out why she would be crying. No one in our family had been sick nor were any close relatives known to be gravely ill.

As I landed inside the yard mom said, “They killed Kennedy.” Say what?

At first, I thought I had incorrectly heard what mom had said. She was sobbing heavily as she repeated the news about our beloved president.

I could not say anything. It was not until we entered the house and saw Walter Cronkite on the TV relaying to the country what happened that it hit me like a gut punch. Initially, there was some hope Kennedy had at most been severely wounded.

It was not to be. By the time it was time for me to return to school, Cronkite announced the president was in fact mortally wounded. He was dead. I do not remember if he said the president died en route to or at the hospital to which he was taken. I do remember that Cronkite sounded somewhat choked up. That was something I had never heard or seen from the great man.

When I returned to school everyone was standing around the flagpole. Everyone was crying, even the elderly teachers who had purple and blue-rinsed hair. I remember that because they were very strict and not very prone to smiling. Their having showed any emotion, especially that of crying, caught many of us by surprise. It seemed to accentuate the grief we all felt and were expressing.

Now, 58 years later, I still feel the grief of long ago. In fact, as I write this piece my eyes are becoming a bit wet and I do not feel the least bit embarrassed by that. There has been no other time I have felt such a shock and deep grief regarding someone who died and was not a close friend or family member.

I hope I feel that way about John Fitzgerald Kennedy and remember him and that fateful day for the rest of my life. Whatever his faults or shortcomings may have been did not and do not matter to me.

He was, after all, my beloved president.