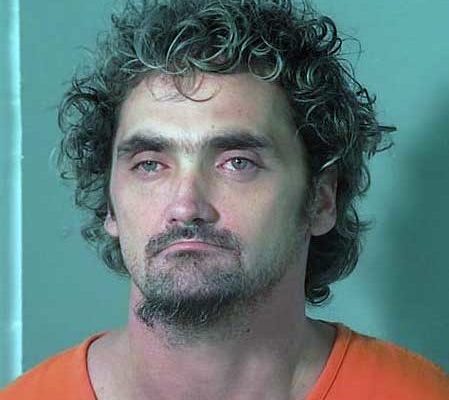 Contributed File Photo/Courtesy GCSO: James Morris was booked into jail on charges of disorderly conduct/domestic violence. It is the third time he has been booked into the jail on similar charges stemming from the same residence within six months.

SAFFORD – It appears that some people have a harder time staying out of jail than others.

James Scott Morris, 40, of Safford was arrested and booked into the Graham County Adult Detention Facility on a charge of disorderly conduct/domestic violence after allegedly causing problems at his family’s home.

Officers were dispatched at about 6:42 p.m. on Tuesday, Feb. 5 to a residence on the 900 block of S. 3rd Avenue regarding a domestic dispute.

The reporting party advised she has an active restraining order against Morris but that she is his brother’s girlfriend and they all live at the same residence. She said James had been acting out of control, yelling and saying he was God and was in charge of the house.

James’ mother was located locked in her bedroom. She advised she didn’t want James in the residence.

James had left the house before police arrived and could not be located at first.

Officers then received a second call from the residence stating James had returned and was harassing them again. This time James was located in the 1200 block of 1st Avenue and was taken into custody.

He appeared agitated during interrogation, according to a police report, and said his brother was the one acting disorderly by kicking walls and talking about church and the bible. He said he returned to the house to retrieve his property and books that he can’t get anywhere else.

He was then transported to the jail.

James was previously arrested and booked on charges of assault/domestic violence in September 2017 against the same victim in the same residence and was booked for disorderly conduct/domestic violence Nov. 13, 2017, after allegedly arguing with his brother in a destructive manner over drugs. In the second instance, both brothers were jailed as it appeared they had both thrown various kitchen items at each other.