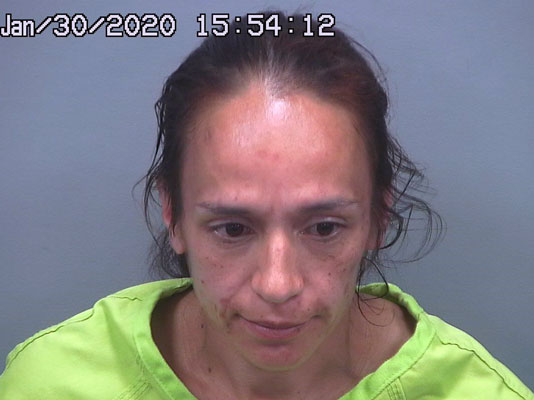 Contributed Photo/Courtesy GCSO: Anna Villalba was charged with aggravated assault and assault with bodily fluids after allegedly spitting on a detention officer and shoving her into a jail restraint chair.

GRAHAM COUNTY – An inmate at the Graham County Adult Detention Facility was given additional charges after an incident with two detention officers on Feb. 10.

According to a Graham County Sheriff’s Office report, a deputy was dispatched to the jail at about 1:44 a.m. after an inmate allegedly assaulted a detention officer.

Upon arrival, three detention officers were finishing putting inmate Anna Villalba, 41, of Thatcher, in a restraint chair. Villalba is listed as a “red flag” inmate and is handcuffed at all times out of her cell.

According to the detention officers, Villalba wanted to take a shower but was told she wasn’t allowed to at that time. Villalba then allegedly requested to use the restroom but after sitting down on the toilet suddenly sprung from the seat and attempted to take a shower.

While attempting to corral Villalba, the detention officer said the inmate spat in her face and then shoved her into the jail’s restraint chair while saying, “you sit in the chair (expletive deleted).”

A second detention officer assisted in placing Villalba in the restraint chair and a third helped as well after Villalba freed one of her legs.

The deputy spoke with Villalba about the incident, but the inmate allegedly advised she didn’t wish to talk about it without her attorney present.

Villalba was initially booked into the jail on charges of criminal trespassing in the second degree, disorderly conduct, and possession of a prescription-only drug. After the incident, additional charges were filed for aggravated assault on a detention officer and assault with bodily fluids. Villalba’s attorney waived her preliminary hearing Feb. 12 and the case was bound over to the Graham County Superior Court.