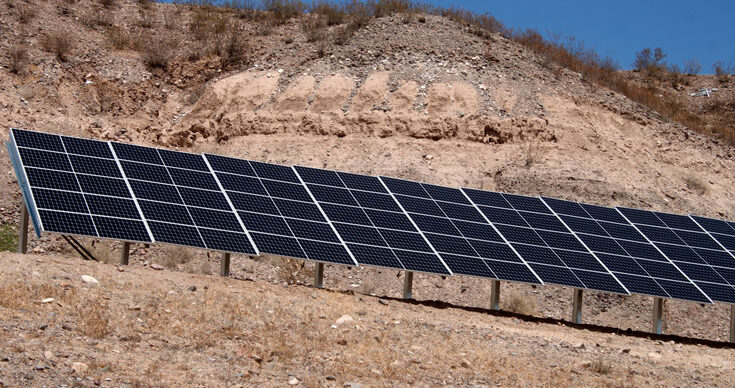 Jon Johnson Photo/Gila Herald: The Graham County Sheriff’s Office and Adult Detention Facility’s electricity operating expenses will be offset by the installation of a solar panel array on the hillside behind the jail.

The new solar system sits perched on the hillside behind the jail. The system should be fully installed and operational this month and is expected to produce more than 320,000 kWh annually.

“This one is a little bit unique because it benefits – in some degree – everyone who is a resident of Graham County because of the way the tax base works,” said Graham County Electric Cooperative General Manager/CEO Phillip Cook.

The project comes at no cost to the county or residents and actually helps lower the bills for every county resident who is a customer of GCEC.

The project is being done through the co-op’s Renewable Energy Standard and Tariff (REST). The REST was approved by the Arizona Corporation Commission in 2006 and requires regulated electric utilities must generate 15 percent of their energy from renewable resources by 2025. According to Cook, utilities file annual implementation plans with the commission that describes how they will comply.

By utilizing a nonprofit government facility, the benefits of the tariff are spread out to a wider swath of cooperative customers by spending it on entities that serve the member base.

The program is a performance-based incentive in which the co-op pays for the project upfront and the entity pays it back through solar generation over the life of the system (25 years) while also reducing its electric bill. Cook advised the system should reduce the jail’s electric bill to a little more than one-third of its previous cost.

According to Graham County Manager Dustin Welker, that would equal an annual savings of about $52,000, as the jail currently incurs about $80,000 in electricity charges annually.

“We retain part of those savings that they would get if they paid for it outright and that’s what pays back the fund which allows us to do more projects,” Cook said.

Previously, the co-op did a similar project in Pima in June 2019 at the Pima Pool, which added a 65-kilowatt solar panel parking shade structure, which reduced the pool’s electric consumption. Cook said the co-op will look to install another project next year as well and could possibly work with the local schools in the future on one.

“After this one’s done we’ll look for one next year and look for a similar type of project,” Cook said.

Welker said the county is pleased to be a recipient of this project with GCEC.

“We’re very grateful to the co-op for reaching out to us for this partnership,” he said. “It will be a good, cost-saving initiative for the jail.”

The Graham County Sheriff’s Office and Detention Facility were completed in November 2017. The $25 million 68,000-square-foot-facility (50,000-square-feet of usable building space) replaced the old 8,500-square-foot-facility and is being paid by a jail district sales tax that began July 1, 2015, and is expected to be in effect until July 1, 2040. That half-cent sales tax passed by just 63 votes out of nearly 7,000 cast in the November 2014 election.