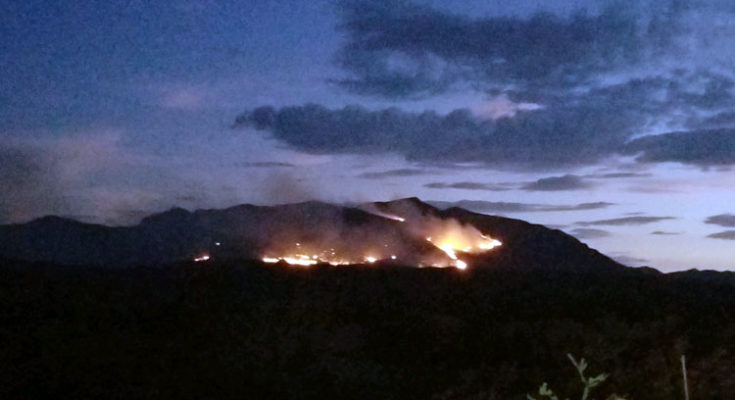 Contributed Photo: The Jackson Fire burns in the Santa Teresa Mountains on Monday night. The fire had grown to 939 acres as of Monday night.

SANTA TERESA WILDERNESS – The lightning-caused Jackson Fire burning in the Santa Teresa Mountains near Jackson Peak west of Pima has grown to 939 acres as of Monday evening.

That same evening, the Southeast Zone Type 3 Incident Management Team took over command of the fire at 6 p.m.

The fire began Saturday, July 11, and at first, was believed to have burned itself out by Sunday morning. However, winds swept in and helped the fire grow, which motivated the Bureau of Land Management to begin retardant drops from single-engine air tankers (SEATS).

The fire is burning in very steep and rocky terrain composed of brushy fuels and grass and is moving northeast toward San Carlos Apache Reservation land.

Two crews and a fire use module are currently assigned to the fire and another hotshot crew will arrive today. The crews will be supported by two helicopters and two engines, and air tankers will be available as needed, according to BLM Public Affairs Officer June Lowery.

Black Rock Road was already closed at the San Carlos Apache Reservation boundary due to COVID-19 restrictions on non-tribal members on reservation land but now it is closed to all due to the fire. A temporary flight restriction has also been placed over the Jackson Fire area.